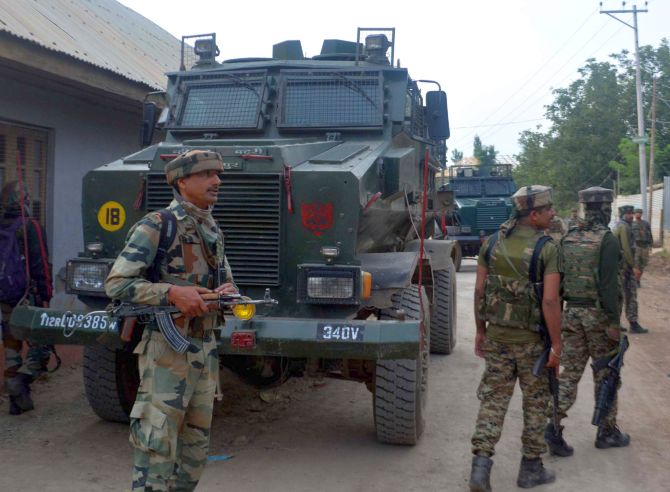 Three local terrorists, who were part of Zakir Musa-led Ansar Gazwatul Hind - an offshoot of Al Qaeda, were on Wednesday killed in an encounter with security forces in Pulwama district in south Kashmir.

A teenaged boy also died due to pellet injuries during clashes between protesters and security forces near the encounter site.

Security forces launched a cordon and search operation in Gulab Bagh area of Tral after receiving specific inputs about the presence of terrorists there, a police official said.

As the forces were conducting the search operation, the hiding terrorists fired on them, resulting in an encounter, the official said.

He said three terrorists were killed in the gun battle with security forces.

They were identified as Zahid Ahmad Bhat, Ishfaq Bhat and Mohammad Ashraf Dar.

A 16-year-old boy died after suffering pellet injuries near the encounter site during clashes between protesters and security forces.

Mohammad Younis was brought to SMHS hospital in Srinagar with critical pellet injuries in the chest, the official said, adding, the boy succumbed to injuries at the hospital.

The security officials said the group affiliation of the slain terrorists was being ascertained.

However, Hizbul Mujahideen claimed that the trio were on their way to rejoin the ranks of the outfit after being associated with so-called Ansar Gazwatul Hind for sometime.

Zahid, Ishfaq and Ashraf who were part of the Zakir Musa-led group were about to rejoin Hizbul Mujahideen but they were killed in a gunfight on the way, a Hizb spokesman told local media outlets over the phone.

The spokesperson said the doors of Hizbul Mujahideen were always open for terrorists who are part of Ansar Gazwatul Hind.

Ansar Gazwatul Hind headed by Musa has been created to divide the Kashmiri nation, he claimed.

"We will issue a detailed statement in this regard and will also expose the elements behind this conspiracy," he added.

Musa recently left the Hizbul Mujahideen and was said to be in touch with other terror organisations.

He was a close aide of top Hizb commander Burhan Wani, whose killing last year had triggered a series of attacks and massive protests against security forces in the Kashmir Valley.