Security advisory to J-K tourists to be lifted from Thursday 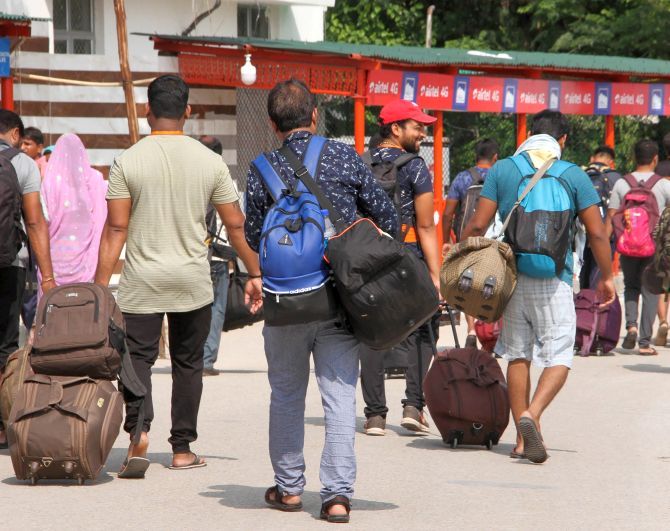 Jammu and Kashmir Governor Satya Pal Malik on Monday directed lifting an over two-month-old advisory which had asked tourists to leave the Valley due to 'terror threat'.

The governor directed withdrawal of the advisory with effect from October 10.

The advisory was issued on August 2, days before the issuance of the presidential order revoking the special status of Jammu and Kashmir, negating the Article 370 of the Constitution.

Malik issued the directive for lifting the security advisory for tourists at a 'situation-cum-security review' meeting with the advisors and the chief secretary here, an official spokesman said.

He said the governor was also informed that as Block Development Council (BDC) elections, scheduled to be held on October 24, are party-based, the delegations of parties having their leaders in jail are being allowed to meet party presidents once so that they can take decision on elections and authorise someone to approve candidates.

"The governor directed that the Home Department's advisory asking tourists to leave the valley be lifted immediately. This will be done with effect from October 10," the spokesman said.

The state administration had on August 2 issued a security advisory asking Amarnath pilgrims and tourists to leave Kashmir as soon as possible, citing terror threat in the Valley.

The governor has been holding situation-cum-security review meetings daily for two hours generally from 6 to 8 pm since August 5.

The meetings initially focused on reviewing the security scenario after imposition of restrictions in the wake of constitutional changes, the spokesman said.

During the past six weeks, he said, all security restrictions were lifted in the most parts of Jammu and Kashmir and the governor has been focusing on bringing life back to normal.

Some of the major decisions taken in the past in the situation-cum-security review meetings include reopening of higher secondary schools, colleges and universities, restarting public transport and opening of additional travel counters at Srinagar's Tourist Reception Centre, the spokesman said.

The decisions also included opening of 25 internet kiosks in each district to facilitate the public and government departments and monitoring attendance in government offices, he added.

"In today's meeting the governor was briefed about the Block Development Council elections which are scheduled to be held on October 24.

"The governor was informed that there is active interest in the BDC elections and most of the seats of chairpersons of BDCs would be filled," the spokesman said.

The governor was also apprised of the progress in apple procurement which has crossed 850 tonnes and worth Rs 3.25 crores, he said, adding some changes in the rates of apple are being made which will be announced shortly.