Sec 144 outside ED office in view of Pawar's proposed visit

The police have imposed prohibitory orders outside the Enforcement Directorate's office at Ballard Pier in South Mumbai in view of Nationalist Congress President chief Sharad Pawar's planned visit on Friday. 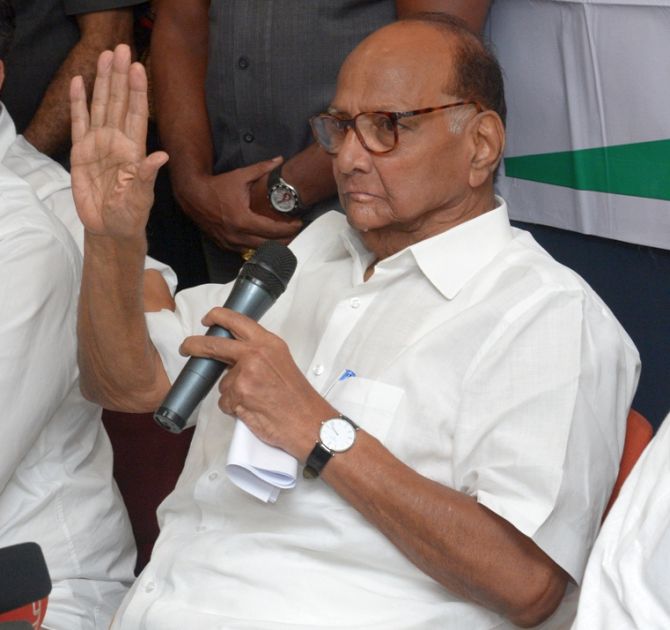 Pawar, named in a money-laundering case by the ED in connection with a scam at Maharashtra State Cooperative Bank, has said he will visit the ED office, even though it has not summoned him yet.

NCP workers had staged protests in Mumbai earlier when the ED named Sharad Pawar in the case.

Anticipating similar protests on Friday, orders prohibiting movement of groups of people under Section 144 of the Code of Criminal Procedure have been imposed outside the ED office, a police official said on Thursday night.

"State NCP's office is in the same are and there is a possibility that large number of NCP supporters would gather during Pawar's visit," he said.

Pawar has appealed party workers not to gather outside the ED office.

'As mentioned during my press conference yesterday, I will be visiting the Mumbai ED office at Ballard Estate tomorrow, Friday 27 September, at 14.00 hrs. @MumbaiPolice @NCPspeaks,' Pawar tweeted earlier in the day.

'I appeal to all my NCP cadre and supporters not to gather near the ED office premises,' he said.

'Keeping our tradition to honour the constitution and respect for institutions, I request your co-operation to the police and other government agencies,' he added.

The ED is expected to disallow entry to the NCP chief in its office to 'submit information' related to the alleged Rs 25,000-crore scam in the Maharashtra State Cooperative Bank (MSCB), officials said on Thursday.

NCP chief spokesperson Nawab Malik said the party patriarch will still persist with his decision to visit the agency's premises in South Mumbai.

ED officials, however, say deciding to question any person or accused in a case is the prerogative of the 'investigating officer' and such a decision is taken when there are reasons to do so.

Pawar has not been summoned yet, they said, adding the Maratha strongman will be called for questioning and recording of statement 'whenever it is required'.

Asked about it, Malik said, "Pawar saheb will go ahead with the decision to visit the office. We are not afraid. Instead of them (the ED) calling us, we will visit it."

The NCP patriarch has already said he would 'voluntarily' visit the ED office and co-operate with the probe agency given his faith in the Constitution.

The former Union minister, however, has also asserted he would not bow before the 'throne' of Delhi, apparently referring to the Bharatiya Janata Party-led government at the Centre.

The veteran leader has been maintaining he was not associated with the bank in any capacity and questioned the timing of the registration of the case which comes just weeks ahead of the October 21 assembly polls in Maharashtra.

The ED has filed a money laundering case against Pawar, his nephew Ajit Pawar, a former deputy chief minister, and others in connection with the scam.

An Enforcement Case Information Report, equivalent to a police first information report, has been registered by the central agency under the Prevention of Money Laundering Act.

The case is based on a Mumbai Police FIR which had named former chairmen of the bank, Ajit Pawar, an ex-deputy chief minister of the state, and 70 erstwhile functionaries of the cooperative lender.

The NCP has termed the ED case as politically motivated. The registration of the case against Pawar had drawn angry reaction from NCP workers who staged protests in various parts of the state, including his home turf Baramati in Pune district.

Police had imposed restrictions on assembly of people in the area where the ED office is located last month when MNS chief Raj Thackeray had appeared before agency officials in a separate money laundering case.