The Supreme Court on Thursday said women, other than cisgender women, may also require access to safe medical termination of pregnancies, while expanding the scope of the MTP Act to include unmarried women with 20-24 weeks pregnancy for abortion. 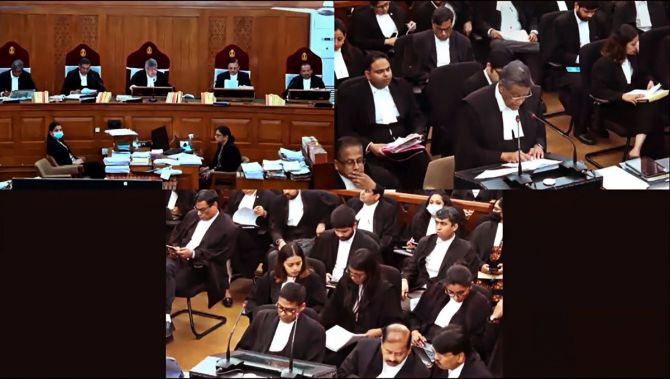 Cisgender is a term for describing people whose sense of personal identity and gender is the same as their birth sex.

The top court in its landmark decision expanded the scope of the Medical Termination of Pregnancy (MTP) Act and the corresponding rules to include unmarried women for abortion between 20-24 weeks of pregnancy, saying limiting the provision to cover only married women will render it discriminatory and violative of Article 14 of the Constitution.

A bench of Justices DY Chandrachud, AS Bopanna and JB Pardiwala said the statutory right of a woman to undergo termination of pregnancy under the MTP Act is relatable to the constitutional right to make reproductive choices under Article 21 (The right to protection of life and personal liberty) of the Constitution.

"Before we embark upon a discussion on the law and its application, it must be mentioned that we use the term "woman" in this judgment as including persons other than cis-gender women who may require access to safe medical termination of their pregnancies," Justice Chandrachud said, while writing the 75-page verdict on behalf of the bench.

The top court's verdict came on an appeal of a woman from the North East challenging the Delhi High Court order denying her permission to abort her pregnancy out of a consensual relationship after her partner refused to marry and left her.

The court said depriving women of autonomy not only over their bodies but also over their lives would be an affront to their dignity.

"The right to choose for oneself -- be it as significant as choosing the course of one's life or as mundane as one's day-to-day activities -- forms a part of the right to dignity. It is this right which would be under attack if women were forced to continue with unwanted pregnancies," the bench said.

It added that the MTP Act recognises the reproductive autonomy of every pregnant woman to choose medical intervention to terminate her pregnancy.

"Implicitly, this right also extends to a right of the pregnant woman to access healthcare facilities to attain the highest standard of sexual and reproductive health. It is meaningless to speak of the latter in the absence of the former. Reproductive health implies that women should have access to safe, effective, and affordable methods of family planning and enabling them to undergo safe pregnancy, if they so choose," it said.

The court noted the crisis of unsafe abortions still looms large despite the enactment of the MTP law in 1971 and unsafe abortions are a leading but preventable cause of maternal mortality and morbidity.

"However, despite the enactment of the MTP Act in 1971, unsafe abortions continue to be the third leading cause of maternal mortality, and close to eight women in India die each day due to causes related to unsafe abortions," the bench said, while referring to a report of United Nations Population Fund.

It said the absence of sexual health education in the country means that most adolescents are unaware of how the reproductive system functions as well as how contraceptive devices and methods may be deployed to prevent pregnancies.

"The taboos surrounding pre-marital sex prevent young adults from attempting to access contraceptives. The same taboos mean that young girls who have discovered the fact that they are pregnant are hesitant to reveal this to their parents or guardians, who play a crucial role in accessing medical assistance and intervention," the court noted.

The Directive Principles of State Policy in the Constitution, it said, lay down the fundamental principles in the governance of the country and press upon the State to apply them while making laws.

The bench went on to say the state must ensure that information regarding reproduction and safe sexual practices is disseminated to all parts of the population and it must see to it that all segments of society are able to access contraceptives to avoid unintended pregnancies and plan their families.

"Medical facilities and Registered Medical Practitioners (RMP) must be present in each district and must be affordable to all. The government must ensure that RMPs treat all patients equally and sensitively.

"Treatment must not be denied on the basis of one's caste or due to other social or economic factors. It is only when these recommendations become a reality that we can say that the right to bodily autonomy and the right to dignity are capable of being realised," the bench said.

It, however, clarified that nothing in the judgment must be construed as diluting the provisions of the Pre-Conception and Pre-Natal Diagnostic Techniques (Prohibition of Sex Selection) Act, 1994.