Journalist arrested for 'defaming' Yogi walks out of jail

As journalist Prashant Kanojia was released on bail Wednesday, the fate of five others arrested for posting and sharing alleged objectionable remarks against Uttar Pradesh chief minister Yogi Adityanath hung in balance. 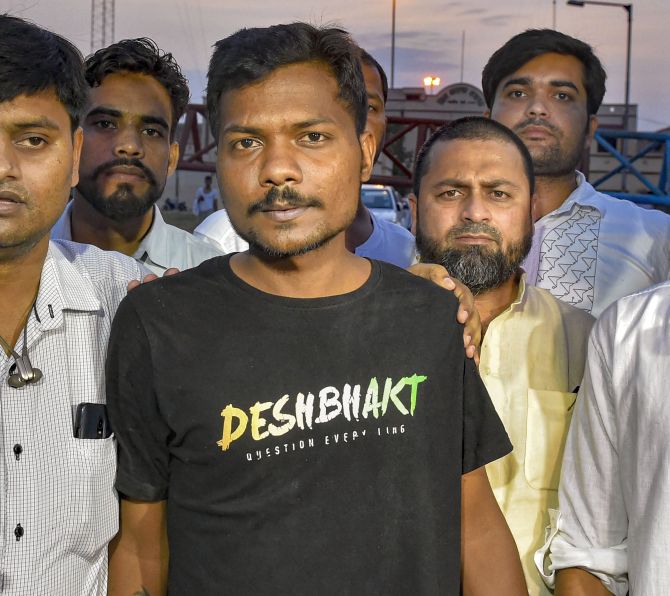 The five others arrested on similar charges include three journalists and two Gorakhpur residents while the police are looking for one each in Kannauj and Basti.

With the Supreme Court breathing down the neck of Uttar Pradesh government for putting Kanojia behind bars, the journalist was granted bail a day after the apex court order.

Kanojia was arrested for sharing a video on his Twitter and Facebook accounts. The video showed a woman repeatedly expressing her desire to marry Adityanath.

According to police, Kanojia's comments on social media had maligned the chief minister's image.

Aditryanath, 47, is a saffron-clad monk-turned-politician who is also the mahant (head priest) of the Gorakhnath mutt.

Officials said Ishika Singh, channel head of Nation Live and editor Anuj Shukla were arrested in Noida on June 8, two days after telecasting the controversial content "without verifying" its authenticity.

The duo was remanded in judicial custody for 14 days.

Nation Live editor Anshul Kaushik was arrested in Noida on Monday night and sent to 14-day judicial custody Tuesday on the same charges which were slapped against the channel head and editor.

In a separate incident, a scrap dealer Peer Mohammad was arrested in Gorakhpur on Monday for making a fake "wedding card" of the UP chief minister go viral on social netowrk.

In Gorakhpur itself, a nursing home manager, Ram Prakash was put behind bars on Monday for making indecent remarks against Adityanath on social media.

Meanwhile, cases have been registered against two other persons on similar grounds, but they have not been arrested so far.

Santosh Kumar Gupta has been booked in Kannauj for uploading a morphed picture of Adityanath, while Vijay Yadav of Basti is facing charges for allegedly making some derogatory remarks against the chief minister on social media, police said.