Six school children and a driver were killed while 11 others were injured when a bus collided with a school van at Birsinghpur in Satna district of Madhya Pradesh on Thursday, a police official said. 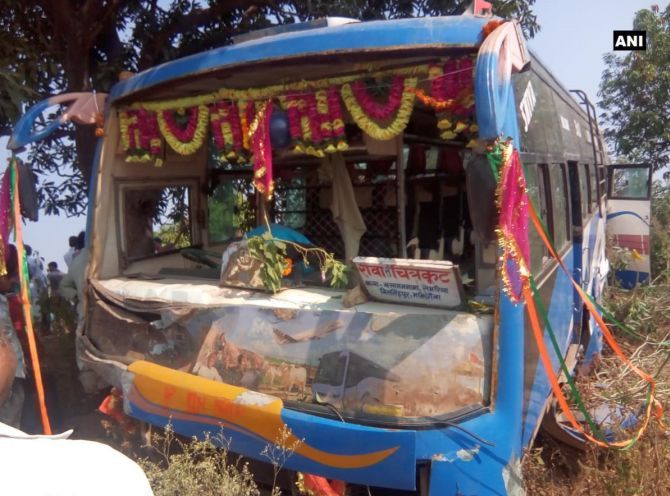 Five children were among those injured and two of them are in a critical condition, police said.

Police had earlier claimed that eight persons, including seven school children, were killed in the accident.

“Six children -- four boys and two girls -- aged between 10 and 15-years, travelling in the school van and its driver were killed on the spot when they were on their way to school,” said Satna district Superintendent of Police Santosh Singh Gaur.

The accident took place around 8.30 am, he said adding the school van was completely damaged in the collision.

The deceased children were students of Lucky Convent School in Birsinghpur, about 40-km from the district headquarters, Gaur said.

According to the officer, due to the impact of the collision, both the vehicles turned turtle. The bus was going to Chitrakoot from Rewa.

“Five students and half a dozen passengers of the bus were injured and admitted to a hospital. While the bus passengers suffered minor injuries, two of the students are in a critical condition,” he said.

The SP said that a magisterial inquiry has been ordered into the accident.

Senior police and government officials, including Collector Rahul Jain, rushed to the spot to take stock of the situation.

The district collector announced an ex-gratia of Rs two lakh to the kin of the deceased and Rs 50,000 to the injured, an official said.

Chief Minister Shivraj Singh Chouhan expressed condolences to the families of the victims.

In a tweet, Congress president Rahul Gandhi expressed grief over the incident and prayed for the speedy recovery of the injured.