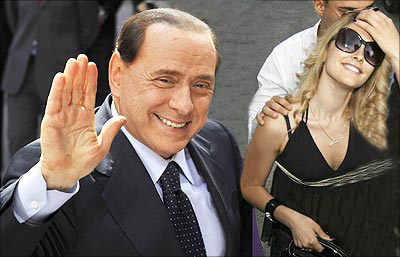 It is hard to imagine what will transpire beyond diplomatic niceties between Prime Minister Manmohan Singh and his Italian counterpart, Silvio Berlusconi, for the next three days in Italy at the G-8 summit.

Dr Singh, it is well known, is a homebound family man and extremely unexcited about the material things in life.

Berlusconi is the very antithesis of what Dr Singh stands for in public and, most importantly, in private.

At the ripe age of 72, Berloscuni is not only Italy's richest man, he is also the most controversial, to the extent of being embarrassing. He is, rightly or wrongly, accused of "lascivious, misogynist, inappropriate, lewd, bumbling treatment of women" by the Italian press.

Italian newspapers and web sites are full of his sexual escapades. His wife Veronica Lario wants to divorce him and his party and country don't know when the PM's flings with 'dancers, show girls, and models' will end.

Reports indicate that Berlusconi's dwindling popularity can cast a shadow over the G-8 summit as well.

The Italian prime minister's messy private life has made his officers jittery. They fear that the G-8 summit of the world's powers might be troubled because of the prime minister's personal scandals. However, tight security will take care of any major showdown.

Italian newspapers have reported that women's rights activists and a group of women academics have urged the wives of the G-8 leaders to boycott the meeting because of Berlusconi's 'sexist' attitude towards women.

In a letter addressed to the wives of G-8 leaders, the women activists and academics have stated, 'We are profoundly indignant, as women employed in the world of universities and culture, at the way in which Prime Minister Silvio Berlusconi treats women both in public and in private.'

Sarah Brown and Michelle Obama are expected to attend the G-8 summit with their husbands, United Kingdom Prime Minister Gordon Brown and United States President Barack Obama, but Berlusconi's wife Lario will not act as the hostess as she is seeking a divorce.

On April 6, an earthquake of 6.3 magnitude on the Richter Scale had hit central Italy, killing 300 people and leaving nearly 60,000 homeless. Berlusconi's cabinet decided to hold the G-8 summit in the earthquake-hit L'Aquila to express solidarity with the people.

L'Aquila is not the the usual ritzy town where the world's richest nations normally meet. The original plan was to hold the G-8 meet at a stunningly beautiful island off the coast of Sardinia.

However, Berlusconi is desperately seeking an image makeover. The G-8 debates and his photo-op with Obama, Chinese President Hu Jintao and the 'saintly' Dr Singh might help stabilise things a bit in these turbulent times.

Berlusconi's officers are worried that a current story about the PM's alleged infatuation with 18-year-old Noemi Letizia can spin out of control. The relentless Italian media has already dubbed the scandal 'Noemigate'.

While Italians are worried about jobs and loss of income, Berlusconi's alleged flirtation with someone who is over 50 years younger has created a social and cultural uproar. On April 26 this year, Berlusconi attended Letizia's 18th birthday party and gifted her a 6,000 gold and diamond necklace.

Surely, the issue might have been over-hyped and taken on political overtones, but Berlusconi is also confounding things by his sensational and contradictory statements.

Last week, he told the media that 'there was nothing wrong in a relationship' with the 18-year-old. Interestingly, Berlusconi is a media magnate who disregards public perception. Some time back, he had selected some 'showgirls' as prospective candidates for the European elections. He was forced to withdraw them following a scathing attack by the media.

Two years ago, he told Mara Carfagna, a member of his Forza Italia party and who is known for her topless pictures and cheap TV shows, that had he not been married, he would have married her. His wife Lario forced him into a public apology. Later, the prime minister made Carfagna his minister for equal opportunity.

A famous Italian columnist wrote in La Stampa that the prime minister is in the middle of a storm, and it seems that he doesn't know how to come out of it, with so many unconfirmed statements and answers.

Italian newspaper La Repubblica has echoed Lario's grief. Obviously, the prime minister is upset and he has attacked the paper for violating his privacy.

(Left) Italy's Prime Minister Silvio Berlusconi and aspiring model Noemi Letizia. Berlusconi is mired in a scandal over his friendship with the 18-year-old Letizia.

From poverty-stricken villages to the G-8 summit