Chief Justice of India S A Bobde on Monday asked the protesting elderly farmers, women and children to go back home, as the Supreme Court expressed serious concern over protestors sitting in severe cold and COVID-19 pandemic situation. 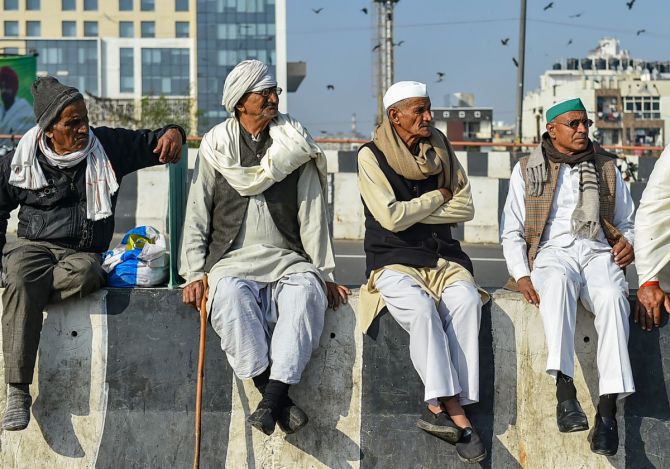 "Let me take a risk and say Chief Justice of India wants them (protesting farmers) to go back to their homes. Try to persuade them," the Chief Justice, who headed a three-judge bench said.

"People are committing suicide. People are calling names. People are suffering in cold and pandemic situations. If not cold, farmers are in danger of COVID," the bench, also comprising Justices A S Bopanna and V Ramasubramanian, told lawyers appearing for the farmers union and asked them to persuade the protestors to go home.

The CJI also said, "People are suffering from cold. Who is taking care of water and food? Old people and women are on the ground. Why are old people in the farmers' protests? We don't want to comment on the merit of the agitation."

The top court said that it had already held that the protest of farmers is perfectly valid and there should not be any impression that it is trying to stifle the protest.

The bench, which will be passing an order on Tuesday on a batch of pleas challenging the new farm laws and on farmers protest said, "If we stay the law there will be no need for farmers to be at the protest site."

During the hearing, the bench told Solicitor General Tushar Mehta that it is not possible to understand whether Centre is part of a problem or solution?

Mehta said that government is part of the solution and many organisations have come to it stating that the laws are progressive.

The bench said that there is not a single pleading before the court which says laws are good.

The bench said, it proposes to form a committee and if the government does not put on hold the new laws then the court will stay the implementation of the farm acts.

It told the lawyers appearing for the farmers union, "We want to make it clear we are not stifling the protest. We have already held that protest is valid. You can carry out the protest but the question is whether protest should be held at the same site."

The bench further said that it has an 'apprehension' that there may be some incident which may breach the peace, which may be intended or unintended and it wants to ensure that no violence or bloodbath takes place on the streets.

Senior advocate Vikas Singh, appearing for one of the parties, said there needs to be some guidelines for protestors.

The bench said, the people who are protesting are not reading guidelines and 'We don't want anybody's blood on our hands'.

When the issue of law and order was raised by some parties, the bench said, "These issues will be taken care of by police. Right to protest is intact and Gandhiji exercised Satyagraha. That agitation was much bigger."

The CJI said, "We should not be understood that we are protecting any law breaker. If anyone breaks the law he will face the consequences. We are not encouraging breaking of law. We propose to pass this order to prevent loss of life and property."

Senior advocate Dushyant Dave, appearing for some farmers unions, said they have maintained complete discipline and nothing has happened in 48 days.

He said that every member from the Punjab family is in the army and no one is going to disturb the Republic day parade.

"We have been asking for three months to let us protest in Ramlila Maidan. Why can't they be allowed to go there?" he said.

The bench said it was concerned with the present ground situation in the form of the farmers protests and asked Dave who shall be held responsible for any bloodshed on the streets.

It is a bounden duty to protect citizens' lives and properties guaranteed under Article 21 of the Constitution, the bench said.

Senior advocate Colin Gonsalves said that the farmers unions had appointed a committee of four lawyers and they will all go back and consult unions and take a stand on the issue.

Senior advocate HS Phoolka said that from his village in Punjab, 40 trolleys have come to protest at Delhi borders including some old people and they have refused to go back.

The bench told Phoolka that passions are running high, but he must tell them (protesting farmers) to go back.

"There is cold. There is COVID. It is not necessary that they (elderly farmers) should be there at protests," it said and asked Phoolka and other lawyers to try to persuade them to go back.

The apex court had earlier issued notice and sought the Centre's response on a batch of pleas against the three contentious farm laws -- the Farmers' (Empowerment and Protection) Agreement on Price Assurance and Farm Services Act, the Farmers' Produce Trade and Commerce (Promotion and Facilitation) Act, and the Essential Commodities (Amendment) Act.