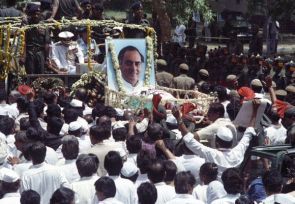 The fate of three death row convicts in Rajiv Gandhi assassination case will be sealed on Tuesday when the Supreme Court will pronounce its verdict on their plea for commutation of their sentence to life imprisonment on ground of delay in deciding their mercy plea.

The judgement will be delivered by a bench headed by Chief Justice P Sathasivam, which had reserved its verdict on the plea of three convicts -- Santhan, Murugan and Perarivalan -- on February 4.

Their plea was strongly opposed by the Centre which had said that it was not a fit case for the apex court to commute death sentence on the ground of delay in deciding mercy plea.

Admitting that there has been delay in deciding the mercy petitions, the government, however, had contended that the delay was not unreasonable, unexplainable and unconscionable to commute death penalty.

The counsel, appearing for the convicts, had contested the Centre's arguments, saying that they have suffered due to the delay by the government in deciding the mercy petitions and the apex court should intervene and commute their death sentence to life term.

The convicts had submitted that mercy plea of other condemned prisoners, which were filed after them, were decided but their petitions were kept pending by the government.

The apex court had in May 2012 decided to adjudicate the petitions of Rajiv Gandhi killers against their death penalty and had directed that their plea, pending with the Madras High Court, be sent to it.

The court had passed the order on a petition by one L K Venkat, seeking transfer of their plea out of Tamil Nadu on the ground that free and fair hearing would not be possible in the state due to the surcharged atmosphere in favour of the convicts.