The political crisis in Karnataka on Wednesday reached the Supreme Court as 10 rebel Congress and Janata Dal-Secular MLAs moved their plea alleging that the state assembly speaker has been deliberately not accepting their resignations. 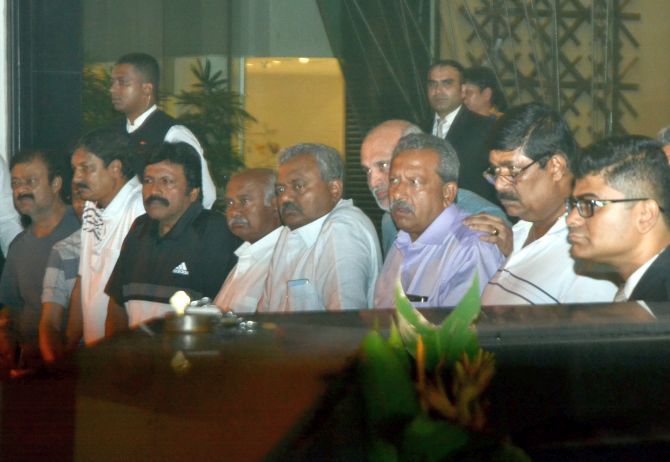 A bench headed by Chief Justice Ranjan Gogoi took note of the submission of senior advocate Mukul Rohatgi, appearing for the rebel MLAs, and assured him that it will see whether their petition can be listed for an urgent hearing on Thursday.

He sought the hearing either on Wednesday or Thursday on the plea in which it has been alleged that the speaker had acted in a partisan and mala fide manner and deliberately not accepting their resignations.

In the petition, the 10 rebel MLAs alleged that the speaker was protecting the government which is in minority now.

"We will see," the bench, which also comprised justices Deepak Gupta and Aniruddha Bose, said when Rohatgi was pressing for an urgent hearing, saying "time is the essence" in the matter.

The rebel MLAs sought, in the plea, a direction for the speaker to accept their resignations.

Further, they have sought a direction that the speaker be restrained from proceeding with the application for their disqualification.

The rebel MLAs alleged, "Acting in a concerted manner, the Congress party has filed a petition before the speaker seeking disqualification of the MLAs who have resigned. Needless to state, the disqualification proceedings are completely illegal and without any cause of action."

In the petition, the MLAs stated that the assembly session is to be begin from July 12, the same day that the MLA's have been asked to remain in person before the speaker, which showed the "intent of the speaker to disqualify the petitioners in a prejudged manner".

"The whole idea is to disqualify the petitioners and under threat of disqualification allow the minority government to function without the support of majority in the house. It is submitted that the actions of the speaker are arbitrary and unreasonable and violative of the Constitution" the plea said.

The MLAs further said that their resignations were in consonance with the rules and the provisions of the Constitution.

"The objection is clearly not warranted and appears to be an exercise to delay the proceedings, thereby giving room for the ruling dispensation to exert pressure on the MLAs who have tendered resignations," the plea said.

The MLAs said that their resignations were voluntary and genuine, more so, they themselves have given innumerable television interviews and statements requesting the speaker time and again to accept their resignation.

"It is pertinent to state that the petitioners have filed affidavits along with the present proceedings stating that they have resigned voluntarily and their resignations may be accepted. And yet the Speaker refuses to act upon the same. The same is completely arbitrary and unreasonable and violative of the Constitution," they said.

The rebel MLAs further alleged, "The actions of the Speaker are not in furtherance of constitutional democracy. Any elected member of the legislature is entitled, in consultation with his conscience or other attendant circumstances, to resign his membership of the legislature."

They said that their resignation was their fundamental right and was on the issue of principle and in public interest.

"The MLAs disenchanted with the mal-administration under the present dispensation wish to resign," they said.

The plea claimed that the Speaker, acting in an arbitrary and illegal manner, was seeking to "frustrate the right" in favour of the petitioner.

It said that denial of such a right was destructive of the principles of democracy and hence violative of the basic structure of the Constitution.

"The chief minister despite being reduced to minority is refusing to seek a vote of confidence. As a result of the concerted acts between the Speaker and the government, a minority government which does not enjoy the confidence of the House, continues in power illegally," the MLAs claimed.

The state assembly speaker had held on Tuesday that the resignations of nine out of 14 rebel MLAs were not in order.

The Congress has sought the intervention of Speaker K R Ramesh Kumar in disqualifying its rebel legislators and accused the BJP of using money power to lure its members. The BJP has denied the charge.

Thirteen MLAs--10 of the Congress and three of the JD-S--submitted their resignation to the Speaker's office on July 6 triggering a fresh political crisis in the JD(S)-Congress coalition government in the state. Another Congress MLA R Roshan Baig resigned on Tuesday.

The ruling coalition's total strength is 116 (Congress-78, JDS-37 and BSP-1) besides the speaker.

With the support of the two independents, who on July 8 resigned from the ministry, the BJP has 107 MLAs in the 224-member House, where the half-way mark is 113. 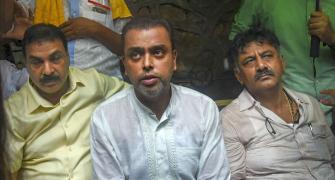