The plea by Ramesh Chandra Tripathi for an out-of-court settlement in the Ayodhya case was mentioned in the Supreme Court on Wednesday, and the counsel for applicant, Prashanth Chandra, was told to approach the court registrar who will assign the matter to the appropriate bench.

A bench of Justices Altmas Kabir and A K Patanik told the applicant that they could not hear the matter since it was a civil suit. The decision on whether the court will hear the plea for deferment on Thursday will be decided by today evening. A new bench will be constituted to hear the plea.

"I don't have the determination to hear the case," Justice Kabir told the petitioner. The two judges reportedly discussed the matter before coming to court room no.2 of the Supreme Court.

The registrar is likely to post the matter for hearing today before another judicial bench.

A three-judge bench of the Allahabad high court had on September 17 rejected Tripathi's petition and imposed 'exemplary costs' of Rs 50,000, terming his effort for an out-of-court settlement of the dispute as a 'mischievous attempt'.

Last week, while two judges on the three-member bench refused to defer the verdict and direct an out-of-court settlement, one of the judges granted the verdict in favour of the applicant.

Tripathi had moved the bench for deferment of the verdict in view of reports in media that the pronouncement might disturb communal harmony and lead to violence. 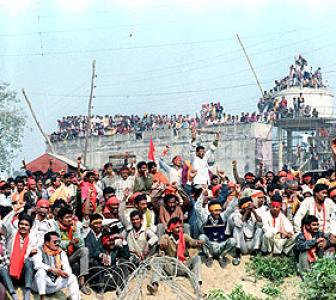