The Supreme Court on Tuesday ordered a stay of the implementation of the contentious three new farm laws hoping this will end the prolonged protests by the farmers and also constituted a four-member panel of agri experts to resolve the impasse between their leaders and the Centre. 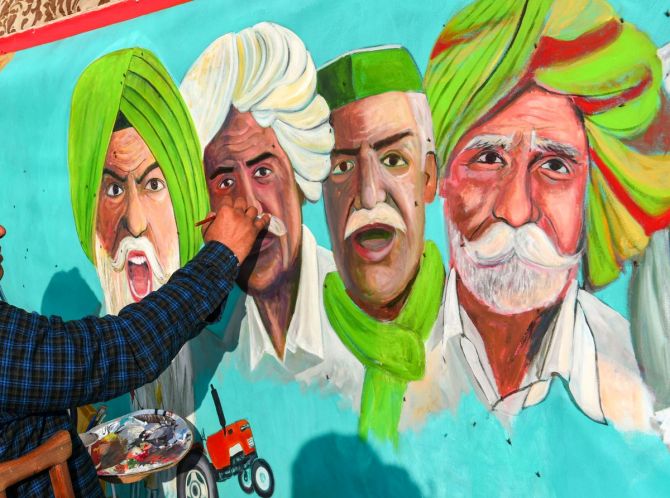 IMAGE: An artist gives finishing touches to a painting on the theme of farmers' protest during their ongoing agitation over the farm reform laws at Singhu border in New Delhi. Photograph: Shahbaz Khan/PTI Photo

But in their response to what the apex court called an 'extraordinary' order of stay, the farmer unions made it clear they will not call off the protests until the three laws enacted in September are repealed.

Thousands of farmers, mostly from Haryana and Punjab, are protesting at Delhi borders since November 28 last, demanding a repeal of the three laws and a legal guarantee to the minimum support price (MSP) system for their crops.

The leaders of the unions also claimed the members of the court-appointed committee tasked to listen to their grievances are 'pro-government', and asserted they will not appear before it.

However, Minister of State for Agriculture Kailash Choudhary sought to allay their apprehensions, saying the panel was 'impartial' and it will take the opinion of all farmers and experts across the country.

Choudhary told PTI in an interview the stay order is against the Centre's wish but the court direction is 'sarva-manya' (acceptable to all).

A three-judge bench of the top court headed by Chief Justice S A Bobde said that as a consequence of the stay till further orders, the MSP system in existence before the enactment of the farm laws shall be maintained.

In addition, the farmers' land holdings shall be protected, i.e., no farmer shall be dispossessed or deprived of his title as a result of any action taken under the farm laws, the bench, also comprising Justices A S Bopanna and V Ramasubramanian, said in its 11-page interim order.

Observing that a stay on implementation of the farm laws at present may 'assuage the hurt feelings' of farmers and encourage them to come to the negotiating table with confidence and good faith, the bench asserted that the apex court cannot be said to be 'completely powerless' to grant stay of any executive action under a statutory enactment.

The top court, while noting that negotiations between the farmers' bodies and the government have 'not yielded any result so far', said constitution of a committee of experts in the field of agriculture to negotiate may create a congenial atmosphere and improve the trust and confidence of farmers.

Eight rounds of talks have remained deadlocked and the ninth round is due to be held on January 15.

"While we may not stifle a peaceful protest, we think that this extraordinary order of stay of implementation of the farm laws will be perceived as an achievement of the purpose of such protest at least for the present and will encourage the farmers bodies to convince their members to get back to their livelihood, both in order to protect their own lives and health and in order to protect the lives and properties of others," the court said, a day after it came down heavily on the Centre over its handling of the protests and negotiations with the farmer leaders.

It said representatives of all the farmers' bodies, whether they are holding a protest or not and whether they support or oppose the laws shall participate in the deliberations of the committee and put forth their views.

The committee shall, upon hearing the government as well as the representatives of the farmers' bodies, and other stakeholders, submit a report before the court containing its recommendations within two months from the date of its first sitting, it said.

The first sitting shall be held within ten days from today(Tuesday), it added.

The court said the proposed committee shall be provided a place as well as secretarial assistance at Delhi by the government and all the expenses for hold sittings at Delhi or anywhere else shall be borne by the Centre.

"The implementation of the three farm laws 1) Farmers' Produce Trade and Commerce (Promotion and Facilitation) Act, 2020; (2) Essential Commodities (Amendment) Act, 2020; and (3) Farmers (Empowerment and Protection) Agreement on Price Assurance and Farm Services Act, 2020, shall stand stayed until further orders," the court said, and posted the matter for hearing after eight weeks.

The court said it is passing the interim order after hearing different perspectives with the hope and expectation that both parties will take this in the right spirit and attempt to arrive at a fair, equitable and just solution to the problems.

"Laudably, the farmers have so far carried on the agitation peacefully and without any untoward incident," the bench said.

The bench also noted that Attorney General K K Venugopal, while agreeing for constitution of a committee, has vehemently opposed the grant of any interim stay on the implementation of these farm laws.

"Though we appreciate the aforesaid submission of the attorney general, this court cannot be said to be completely powerless to grant stay of any executive action under a statutory enactment."

It passed the interim order on a batch of pleas, including those challenging the validity of these farm laws, those supporting these legislations and those raising the issue of the farmer protests.

"Though several rounds of negotiations have taken place between the Government of India and the farmers' bodies, no solution seems to be in sight," it said while referring to the situation on ground.

The court also asked the Centre to file an affidavit on its claim that some banned organisations including 'Khalistanis' have infiltrated the ongoing farmers protest.

Venugopal, appearing for the Centre, claimed that 'Khalistanis' have infiltrated the protest and he will file an affidavit along with the necessary inputs of the Intelligence Bureau (IB).

Shortly after the apex court pronounced its order, the leaders of the farmer unions addressed a news conference at Singhu border in the national capital.

"The members of the SC-appointed committee are not dependable as they have been writing on how agri laws are pro-farmer. We will continue our agitation," Balbeer Singh Rajewal said.

He said unions never demanded that the apex court form a committee to resolve the impasse, alleging the central government is behind these developments.

"We are against the committee in principle. It is the government's way to distract attention from the protest."

The farmer leaders also claimed that the Supreme Court can repeal the farm laws suo motu (on its own).

Another farmer leader Darshan Singh said they will not appear before any committee, adding Parliament should discuss and resolve this issue.

However, the farmer leaders said they would attend the January 15 meeting with the government.

'It is clear that the court is being misguided by various forces even in its constitution of a committee.

'These are people who are known for their support to the three Acts and have actively advocated for the same,' said a statement issued by the All India Kisan Sangharsh Coordination Committee (AIKSCC).

Bharatiya Janata Party spokesperson Nalin Kohli said any order of the Supreme Court has to be complied with by all the concerned parties.

Congress' chief spokesperson Randeep Surjewala said the party welcomes the Supreme Court's concern over the farm laws, but the party has issues with the composition of the committee formed by it.

He told reporters that the members of the committee have already expressed their views in the past favouring the new laws and so the question arises in our minds how justice will be done to farmers by their hands.