The Supreme Court on Thursday asked the Centre to place before it data on deaths due to starvation and malnutrition across the country besides a model plan to implement the community kitchen scheme. 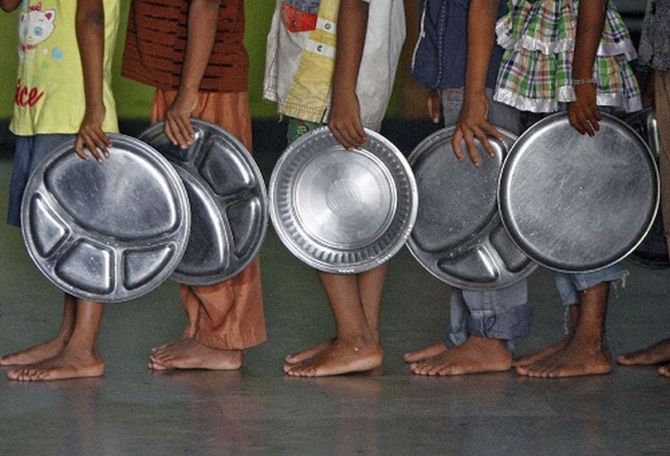 The top court had on January 18 said the Centre will have a role in drafting the model community kitchens scheme and, particularly, exploring the possibility of providing additional food grains for it.

It had granted two weeks to all the state governments and Union Territory administrations to file an affidavit indicating the incidence of starvation deaths, if any, and malnutrition, with a copy in advance to the counsel for the petitioner as also the attorney general who will collate the national data for court's perusal.

Additional Solicitor General Madhvi Divan told a bench of Justices A S Bopanna and P S Narasimha the details were being sought from all state governments in terms of the earlier order, and sought some more time to collate the material and file an appropriate report before the court.

The bench took note of the fact that some states have not provided the information to the Centre and conceding the ASG's request listed the plea for further hearing on November 3.

At the outset, lawyer Ashima Mandla, appearing for PIL petitioner Anun Dhawan and others, said as per the latest data, the number of Indians who go to sleep hungry has increased from 19 crores in 2018 to 35 crores in 2022.

She also said existing programmes like Mid-Day Meal Scheme, ICDS and others, provide food only to a limited class of population such as children till 14 years of age, senior citizens, pregnant and lactating women.

“Therefore there is no scheme to provide cooked food to the general population,” the lawyer said.

On the issue of data on deaths, the bench said it is not even discovered that a death has been caused due to starvation or malnutrition.

The top court had on January 18 this year taken a strong note of the Centre's statement that no states have reported deaths due to starvation, quipping whether it should be taken as a “correct statement”.

It had then asked the Centre to prepare a model plan to implement the Community Kitchen Scheme across the country and provide additional food grains to states to run it, saying the issue of "hunger has to be taken care of".

The bench was hearing a PIL seeking directions to the Centre, states and Union Territories to formulate a scheme for running community kitchens to combat hunger and malnutrition.

Prior to this, it had expressed strong displeasure over the Centre's response to framing a policy for the Community Kitchen Scheme.

"This affidavit does not indicate anywhere that you are considering framing a scheme. You are extracting information. It does not say what fund you have collected and what you are doing etc. We wanted a uniform model from the Centre. You have to ask the states... Not to collect information like police,” the bench had said.

The apex court had on October 18, 2019 favoured setting up community kitchens, saying the country needs this kind of a system to tackle the problem of hunger.

It had issued notices to the Centre and all states asking for their responses to the PIL seeking directions to all the states and UTs to set up community kitchens.

The plea claimed many children under the age of five die every day due to hunger and malnutrition, a condition that was violative of various fundamental rights, including the right to food and the life of citizens.

The PIL, filed by social activists Anun Dhawan, Ishann Dhawan, and Kunjana Singh, also sought a direction to the Centre for creating a national food grid for people falling outside the purview of the public distribution system.

Besides that it wanted an order to be issued to the National Legal Services Authority (NALSA) for formulating a scheme to mitigate hunger-related deaths.