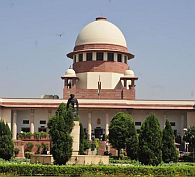 Three 1993 Mumbai blasts convicts' petitions for extension of time to surrender on the ground that their clemency pleas are pending before President Pranab Mukherjee, were on Tuesday dismissed by the Supreme Court.

A bench headed by Chief Justice Altamas Kabir rejected their petitions, saying extension of time to surrender cannot be given on the ground that clemency plea is pending before the President.

The apex court had on March 21 upheld the TADA court's verdict of five-year jail term to Kazi who is suffering from cancer.

It has enhanced to life imprisonment the five-year jail term awarded to Hajwane by the trial court. He spent five years in prison during the trial in the case.

The life sentence was awarded by the TADA court to Parker was upheld by the apex court. He has already served over 14 years in jail.

Former Supreme Court judge and Press Council of India chief Markandey Katju had made a representation to the President on behalf of Kazi on March 18 and on behalf of the other two on April 10.

The writ petitions filed by them had pleaded that they should not be asked to surrender till the representation made by Katju on their behalf is decided by the President.