As a blame-game erupted between Tamil Nadu and Kerala over the devastating floods, the Supreme Court on Friday directed the panel on the Mullaperiyar Dam to ensure that the water level at the reservoir is maintained at 139.99 feet till August 31. 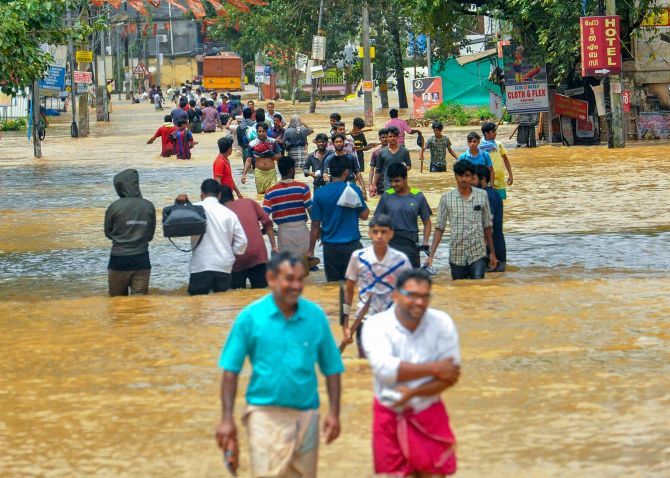 The Mullaperiyar Dam, built in 1895 on Periyar River in Idukki District of Kerala, came under the spotlight with the Kerala government accusing Tamil Nadu, which maintains the reservoir, of sudden release of water leading to unprecedented deluge in the state.

Kerala's claim was on Friday rebuffed by Tamil Nadu Chief Minister Edappadi K Palaniswami, who said the neighbouring state had suffered the deluge due to the discharge of excess water from 80 reservoirs spurred by heavy rains there.

The Tamil Nadu government also filed an affidavit in the apex court today charging Kerala with an 'obstructionist attitude and non-cooperation' and alleging that it was helping illegal encroachments.

However, the top court steered clear of the dispute between Tamil Nadu and Kerala over the maximum permissible limit of water level of 142 ft in the dam as fixed by it in its 2014 verdict and said that currently, it was concerned with disaster management and maintaining the water level at 139 ft to ensure that the flood situation does not worsen.

"Needless to say, the present writ petition has nothing to do with any kind of dispute between the states of Tamil Nadu and Kerala, but it relates to saving of human lives in the obtaining situation of disaster," a bench headed by Chief Justice Dipak Misra said.

The bench, also comprising Justices A M Khanwilkar and D Y Chandrachud, took note of the submissions of Additional Solicitor General P S Narasimha, representing the Centre, that the sub-committee on the dam met on August 23 and directed 'maintaining the water level at 2 to 3 ft below the permitted level (of 142 ft)'.

The law officer also said the chairman of the panel has directed that the 'current status of reservoir and water level is at 139.99 ft at Mullaperiyar dam, which shall be maintained till August 31'.

"At this juncture, we may direct that the Committee which has met yesterday, shall see to it that as far as practicable water level be maintained at the dam and both the states ... shall cooperate with the Committee," the bench ordered.

Senior advocate Shekhar Naphade, appearing for Tamil Nadu, alleged that the plea seeking to lower the water level at the dam could be part of a 'sinister design' to circumvent the apex court's decision fixing the permissible limit at 142 ft.

The bench said it would not get into the maximum limit as fixed by it in 2014 but rather deal with the aspect of disaster management.

It then fixed for hearing on September 6 the plea filed by Kerala resident Russel Joy seeking a direction to Tamil Nadu to manage the water level in the dam as the floods in Kerala have created a havoc.

It asked the Tamil Nadu and Karnataka to file their responses to the affidavit filed by Kerala in the matter.

Lawyer G Prakash, the standing counsel for Kerala, said the Supreme Court in 2014 had fixed at 142 ft the maximum permissible water level in the dam.

However, the Kerala government had then set up the 'Dam Safety Authority' and fixed the maximum limit at 136 ft, the apex court had set aside the decision of the state government, the lawyer said.

The 18th century dam's full reservoir level stands at 152 ft and the limit of 142 ft has been fixed keeping in view its safety.

In 2007, an experts panel had submitted a report to the Kerala government saying there were chances of the dam breaking if the water level was raised beyond 136 feet.

A 2009 report by IIT Roorkee had also stated that the dam 'was likely to face damage if an earthquake of the magnitude of 6.5 on the Richter scale struck its vicinity when the water level is at 136 feet'.

In 2012, a 5-member Supreme Court-empowered Committee headed by former Chief Justice of India A S Anand on the Mullaperiyar Dam had submitted its report to the top court, focussing on all aspects of the 123-year-old dam and its safety.

The Kerala government had on Thursday told the apex court that the sudden release of water from the Mullaperiyar Dam by the Tamil Nadu government was one of the reasons for the devastating deluge in the state.

It had said that out of a total population of about 3.48 crore, more than 54 lakh or one sixth of the population of Kerala, had been directly affected by the floods.

The top court had earlier ordered the disaster management panel of the Mullaperiyar Dam to urgently decide on lowering the water level.