The Supreme Court on Thursday refused to restrain the Rajasthan high court from passing order on a plea of sacked deputy chief minister Sachin Pilot and 18 other dissident Congress MLAs challenging the disqualification notice against them and said it would be subject to the outcome of petition before the apex court.

Observing that “voice of dissent” in a democracy cannot be shut down, the apex court refused to accept the request of Rajasthan assembly speaker C P Joshi to either stay the matter pending before the high court or transfer it to the apex court.

A bench headed by Justice Arun Mishra was hearing an appeal filed by Joshi against the high court's direction asking him to defer the disqualification proceedings till July 24.

The high court is scheduled to pass its order on Friday on the plea filed by the 19 dissident Congress MLAs.

The apex court, which heard the matter through video-conferencing, said that issue raised in the plea filed by the Speaker required “prolonged hearing” as it involved “larger question” related to the democracy and how it will survive.

“As the high court has already heard the matter after prolonged arguments and reserved the order, we are not staying the passing of the order, however, whatever order is passed, shall be ultimately subject to the outcome of this petition,” the bench, also comprising Justices B R Gavai and Krishna Murari, said and fixed the matter for hearing on July 27.

“The case requires prolonged hearing so as to decide the question of jurisdiction. However, prayer is made that the high court should not pass an order on which it has heard the matter and reserved the order,” the bench said in its order.

Senior advocate Kapil Sibal, appearing for the speaker, raised questions over jurisdiction of the high court in entertaining the plea filed by the MLAs and said that the court can only intervene after the speaker takes a decision on either suspension or disqualification of a member of the House.

He referred to a famous top court verdict rendered in the 1992 Kihoto Hollohan case, in which it was held that courts can't intervene in the disqualification proceedings undertaken by the speaker under Tenth Schedule to the Constitution.

Sibal said that speaker has not decided anything and he has just issued notice to these MLAs and they should respond to it.

He referred to the grounds for the disqualification proceedings and said not attending party meeting, conspiracy to destabilise their own government, going to Haryana and staying in hotel incommunicado, giving statements on TV and demanding floor test against their own government amounts to “voluntarily giving up membership of the party” under paragraph 2(1)(a) of the Tenth Schedule.

The bench then asked whether these MLAs have been either expelled from the party or have they resigned.

When Sibal said “No”, the bench observed, “We are trying to find out whether the process resorted to is permissible or not”.

To this, Sibal said, “Whether it is permissible or not, the court can't go into in at this stage”.

The bench observed, “Voice of dissent in democracy cannot be shut down like this”.

“This is not a simple matter. This is a matter where persons are elected by the public. They are peoples' representative,” the bench said, adding that the Speaker has the right to decide on the disqualification issue but there has to be reasons also.

Sibal said these MLAs can voice their dissent in the party meeting and as the speaker has given them chance to respond to the disqualification petition, they can explain all these aspects.

He said reasons have to come in disqualification proceedings and the high court's direction to defer it is like a “protection” to these MLAs.

Senior advocate Harish Salve, appearing for some of the dissident MLAs, said counsel for the speaker had appeared and argued at length before the high court and now they can't ask for a stay of the proceedings there.

Senior advocate Mukul Rohatgi, appearing for some of these MLAs, said that when the Speaker had extended the time twice when matter was heard there, then what is the problem if the high court says so.

During the hearing, the bench asked Sibal, “If somebody is not attending it (party meeting) then will it be taken as that he is against the party?”.

To this, Sibal said, “Who says they will be disqualified on this ground? The speaker will decide the issue”.

He said it is not only for not attending the party meeting as there is much more to it and the Speaker has to examine the conduct of the members of the House.

When the bench said the matter was required to be heard at length, Sibal said, “I request transfer of high court's matter to yourself”.

When the bench said, “Not right now”, Sibal said then the apex court should stay the further proceedings in the high court.

The hearing also saw some lighter moment when the bench asked Sibal, “Why you are in pain?”.

Sibal responded with a smile and said, “I am not pained”.

Justice Mishra then said, “I thought you are in a thinking process. You are an elder person and you may have this feeling”.

Sibal then said, “Now a days, I am immune as so many things are happening”.

'Congress high command never reached out to Pilot'
'Saddened but not surprised': Pilot on MLA's charges 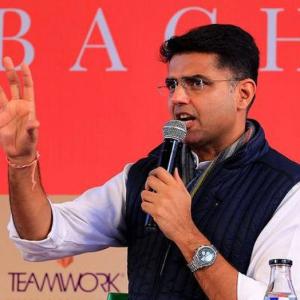