The Supreme Court on Wednesday issued a notice to the Delhi government on a plea challenging the odd-even road rationing scheme in the national capital. 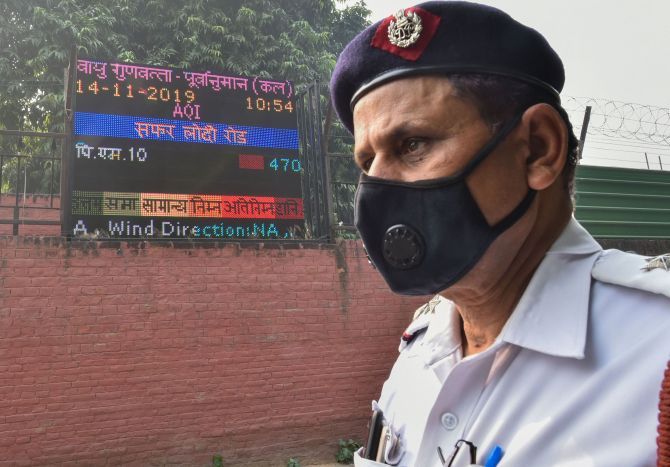 IMAGE: A traffic policeman wearing an anti-pollution mask stands next to a digital board displaying Air Quality Index on the compound wall of a weather observatory, at Lodhi Road in New Delhi. Photograph: Arun Sharma/PTI Photo

A bench of Justices Arun Mishra and Deepak Gupta also directed the Delhi government and the Central Pollution Control Board to place before it the data of pollution in Delhi from October till November 14 this year.

The bench also directed them to submit pollution data from October 1 to December 31, 2018.

The petition, filed by a Noida-based advocate, has alleged that the Delhi government's November 1 notification on the scheme also violates fundamental rights.

It alleged that the odd-even rule violates citizens' rights to practice any profession, carry out any occupation, trade or business and to move freely throughout the country.

Delhi government's odd-even scheme this year came into effect on November 4 and will continue till November 15. Under the scheme, four-wheelers with registration numbers ending with odd digits ply on odd dates and those ending with even digits ply on even dates.

The PIL had alleged that the scheme is arbitrary, contrary to statutory provisions and is nothing but a "political and vote bank gimmick".

"The odd-even vehicle scheme violates the fundamental rights of residents of Delhi and adjoining states who daily commute in/out of Delhi in their four wheeled vehicles to do their jobs/business to earn their livelihood and is ultra vires Article 19(1)(g) of the Constitution of India," the plea said. 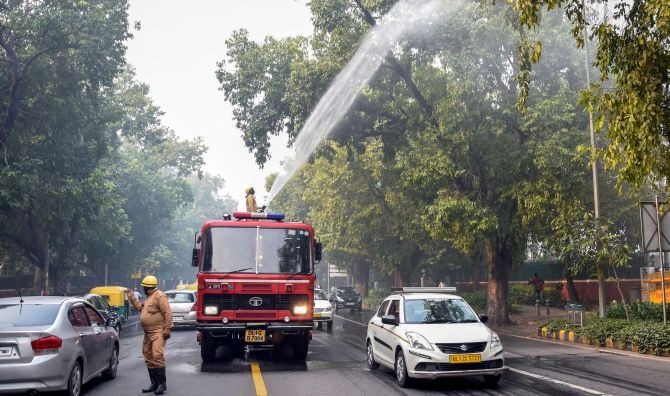 Questioning the rationale behind the scheme, the plea claimed that three sources of data on Delhi's air-quality, including those by the CPCB and the Delhi Pollution Control Committee, have confirmed that in the past the odd-even rule did not lower pollution levels in the national capital.

"It shows that odd-even is nothing but a political and vote bank gimmick as it has been done capriciously in an unreasonable manner," it said.

The petition said that the odd-even rule is only meant for four-wheelers whereas two wheelers, which cause more pollution in comparison to cars, have been kept out of its ambit.

The scheme also discriminates between men and women on the basis of gender, the plea claimed. Four-wheelers driven by women are exempted from the odd-even scheme, provided there are no men in the vehicle.

"Odd-even is nothing but a political gimmick for self-promotion and advertisements in the smoke screen of curbing pollution," it alleged.

The plea also alleged that there seems to be a strong nexus between stubble-burning framers, political parties, air purifier companies and mask-making companies.

"The Delhi government is no Nostradamus (famous French astrologer). Then how come it knows well in advance when smoke from stubble burning will reach Delhi exactly around odd-even scheme dates," it said.

The dates for implementation of the rule were declared on September 13 but the Delhi government's advertisements these days claim that it has been reintroduced as smoke from stubble-burning in neighbouring states is reaching the city.

The top court had earlier questioned the Delhi government as to what it was achieving from the odd-even scheme by stopping plying of cars that are less polluting compared to two and three-wheelers and taxis.

"Let the Government of NCT of Delhi explain this aspect and file data in this regard in the court on the basis of the previous experience and whether three-wheelers and taxies are plying more on roads during such restrictions and relevant data be placed," the bench had said.

"During odd-even scheme, what is the difference being caused by stopping use of four-wheelers when various other contributory factors are not taken care of by the Government of NCT of Delhi," it had said.