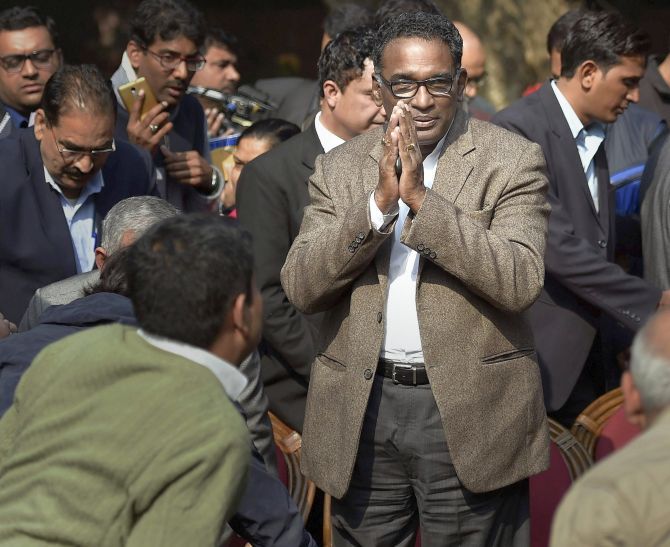 The decision of four senior-most judges of the Supreme Court to hold a press conference was on Friday termed as “unprecedented” by the legal fraternity, with some experts terming it as “shocking” while some others saying there could have been some compelling reasons for such a move.

Some legal luminaries also said the turn of events had raised a question mark about the credibility of the judicial system.

Bharatiya Janata Party leader and Rajya Sabha MP Subramanian Swamy said when such judges come out to do a press conference, it is necessary to take them seriously rather than finding fault.

Swamy said the prime minister should take an initiative and contact the Chief Justice and the four judges to resolve the whole situation through the process of consultation.

However, Justice Sodhi questioned the move of the top judges approaching the media and asked how they can administer the Supreme Court through press conferences.

“I am so pained at the outcome of the things... It is appalling. How can you administer Supreme Court by press conference. Are you going to hold a referendum and ask people what is right and wrong,” Justice Sodhi said.

Justice Mudgal said the four senior-most judges were bringing the issues to light which according to them was necessary to be brought to the public notice.

He said they must have had compelling reasons to go public and “they are not publicity hungry judges and do not crave for unnecessary publicity”.

Terming the presser as “a welcome step”, senior lawyer Indira Jaising congratulated the four judges for the “bold move” and said: “As they said they are discharging a debt to history, namely to let the nation know that something is going wrong and needs to be corrected.”

She said the intention of the press meet was “to build a consensus to owe a debt of duty to the institution as a whole and ensure that this institution survives for you and me.”

“These four judges are very responsible. If they are doing this, the situation would have definitely gone out of control. They said the CJI was misusing his administrative
powers to allot all cases,” Bhushan said.

Senior lawyer KTS Tulsi said the step was quite shocking and one had never thought that “things would come such far compelling the four senior-most judges to adopt this course of action.”

“I am sure they (four judges) have exhausted all other remedies. One could see pain on their faces while they were speaking. The whole matter is with respect to judicial propriety. The question is of natural justice. Whatever is the law for common man, it is applied much more rigorously as far as judges are concerned because they must always be above suspicion,” Tulsi said.

Similarly, former union minister and senior advocate Khurshid said there were some deep differences among the judges about how the apex court should function, terming it as a matter of anguish.

“I can only hope that conversation among the judges will not snap and will continue and that with accommodation and logic it will be settled. It has come too far,” Khurshid said.

“This press conference is a strike at the root of the institutional integrity of the higher judiciary. It has raised question marks about the credibility of the system as such and has directly cast aspersions at the head of the Indian judiciary.

“I think the people of this country who have had highest regard to the highest judiciary will now be forced to think aloud as to whether we have gone gravely wrong somewhere,” he said.

Accompanied by three senior judges Justices Ranjan Gogoi, M B Lokur and Kurian Joseph, Justice J Chelameswar himself said “this is an extraordinary event in the history of any nation, more particularly this nation and an extraordinary event in the institution of judiciary... It is with no pleasure that we are compelled to call this press conference.

“But sometimes administration of the Supreme Court is not in order and many things which are less than desirable have happened in the last few months.”

Press conference by 4 SC judges could have been avoided: AG

Attorney General K K Venugopal said the unprecedented move by the four senior Supreme Court judges in holding a press conference "could have been avoided" and the judges would now have to act in "statesmanship" to ensure complete harmony.

Venugopal, who had a meeting with Chief Justice of India Dipak Misra after the press conference, spoke on much persuation and expressed hope that all judges, including the CJI, would rise to the occasion and "wholy neutralise" the "divisiveness".

"What has happened today could have been avoided. The judges will now have to act in statesmanship and ensure that the divisiveness is wholly neutralised and total harmony and mutual understanding will prevail in future," he said.

"This is what all of us at the bar want and I am sure that the judges, including the CJI, will rise to the occasion," he said, but declined to come out with details of his deliberations with the CJI and others.

"I had promised to the judges that I would not speak to the media," Venugopal said.

Sources said judges, other than the four senior most ones, also held a meeting during the recess and were concerned about the unprecedented development.

Repeated attempts to reach out to the CJI and his office to get his comments on the development did not fructify.

Expressing deep anguish over four Supreme Court judges going public, former Solicitor General of India N Santosh Hegde said he was "devastated" by their action which has caused "irreparable" damage to the institution.

"As a retired judge of the Supreme Court, I feel devastated.

"For some reason or the other, their cause is justified, (but) relief they are seeking is wrong...going to the media? No. Judiciary was always considered as a family. Family disputes are never taken to the streets," he said.

In democracy, people have lost faith in Legislature and Executive, and their faith lies only in Judiciary now, he said.

The delay in disposal of cases is one of the things that is causing concern to people and diminishing their confidence in the system, and judges going public with their allegations has further dented people's faith in the system, Hegde said.

"I feel very sad about it. I am sure they (the four judges) are hurt with many things which ought not to have happened. But for heaven's sake, what they did was wrong. I don't think this damage can ever be repaired," he said.

"It amounts to a Constitutional crisis now. And it will lead to all sorts of criticism from aggrieved people from the judiciary and people who have benefited from the judiciary will not speak about it. And in the long run, judiciary is (will become) another subject matter of Tom, Dick and Harry," he said.

The former Karnataka Lokayukta and the retired Supreme Court judge said Judiciary is totally different from Legislature and Executive, and the four judges, by raising allegations in public, have brought them to the same level.

"I have no doubt that (the four) judges of the Supreme Court have good grievances against the Chief Justice of India. I have no difficulty about that. But the method used by them to find relief from the public is wrong. It should be decided within the family (of Judiciary) itself, and not brought into public discussion," he said.

Hegde said seeking public support or public opinion in the matter is "fully wrong". "Yes, there are serious allegations against the Chief Justice of India. I see that. But the method adopted by them is fully wrong. It's a damage that can never ever be repaired," he added.