The Supreme Court on Monday came down heavily on some of the petitioners for seeking adjournment of hearing on pleas challenging the Karnataka high court verdict refusing to lift the ban on hijab in educational institutions of the state, saying it would not permit "this kind of forum shopping". 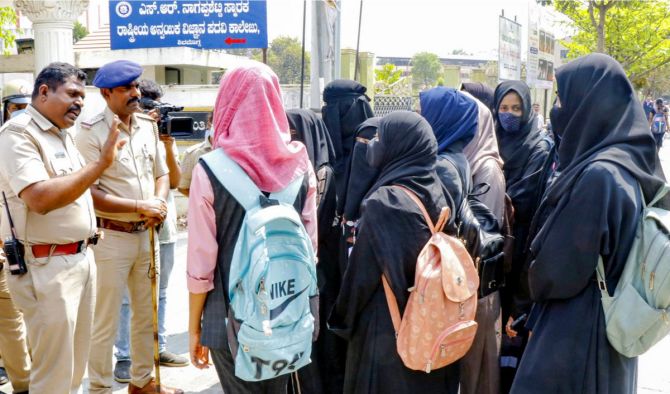 The apex court, which issued notice to the Karnataka government on the pleas, observed that the petitioners in the matter had repeatedly sought early hearing and when these pleas have been listed, a letter has been circulated requesting for adjournment.

"This is not acceptable. You asked for early hearing time and again…Now, it is listed and you ask for this," said a bench of Justices Hemant Gupta and Sudhanshu Dhulia.

"We will not permit forum shopping. That is all. Come tomorrow for arguments. We will hear you tomorrow," the bench said at the outset.

Solicitor general Tushar Mehta, appearing for Karnataka, said a letter has been circulated in the matter.

"Can I make one request, if it appeals to your lordships. They are the petitioners. So, in view of the letter circulated, your lordships possibly consider not to pass any order adverse to them. Can your lordships consider issuing notice?," Mehta told the bench.

He said if notice is issued on these pleas, at least one stage would be over and arguments in the matter could be heard on the next date.

The bench issued notice to the state and other respondents on these pleas and posted them for hearing on September 5.

One of the advocates, appearing for some of the petitioners, said these matters came up suddenly in the cause list on Saturday and there are some advocates who have to come for the hearing in the apex court from Karnataka.

Mehta said a question of law was involved in the matter and no counter may be required to be filed.

When the bench posted the matter for hearing on September 5, one of the advocates requested that two weeks' time may be given.

"May I request. Your lordships may give two weeks. It will not make much difference," one of the counsels said.

The bench said the petitioners were earlier asking for hearing in the matter.

The solicitor general said he has the list and these matters were mentioned for listing six times.

The counsel said hearing was sought earlier because those days, exams were going to take place, and now they have to prepare the brief.

"So, you would have argued without preparation in those days?" Mehta asked.

The bench observed, "This kind of a forum shopping, we will not permit."

A total of 24 petitions, including those challenging the high court verdict, were listed for hearing before the top court.

Several petitions have been filed in the apex court against the March 15 verdict of the Karnataka high court verdict holding that wearing of hijab is not a part of the essential religious practice which can be protected under Article 25 of the Constitution.

In one of the pleas filed in the top court, the petitioner said the high court has “erred in creating a dichotomy of freedom of religion and freedom of conscience wherein the court has inferred that those who follow a religion cannot have the right to conscience.”

The plea said the petitioner had approached the high court seeking redressal for the alleged violation of their fundamental rights against the state government order of February 5, 2022, issued under Sections 7 and 133 of the Karnataka Education Act, 1983.