The apex court said that it can’t get into comparative pricing details. 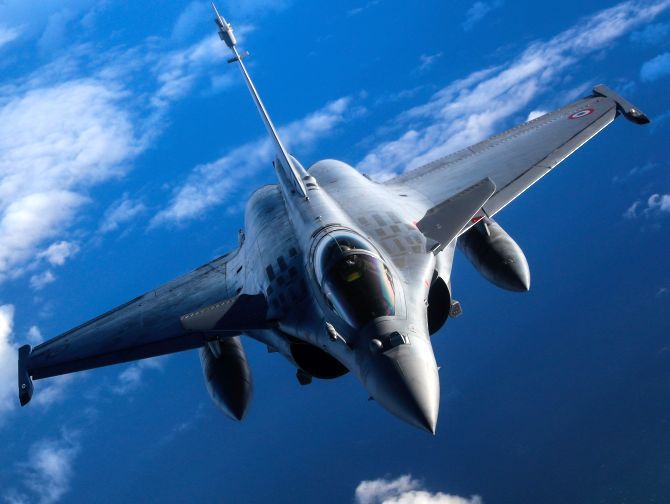 IMAGE: The apex court said there was a necessity for fighter aircraft such as the Rafale. Photograph: Eddie Keogh/Reuters

In a major relief to the Modi government, the Supreme Court on Friday said it was "satisfied" with the decision making process in concluding the Rafale fighter jet deal and rejected demands for a probe, sparking bitter exchanges between the Bharatiya Janata Party and the Congress.

The verdict by the apex court that it found no reason to intervene on what it called the "sensitive issue" of purchase of 36 jets from France came as a political victory for the BJP and Prime Minister Narendra Modi just days after the defeat of the party in three Hindi-heartland states -- Madhya Pradesh, Rajasthan and Chattisgarh -- in the assembly polls at the hands of the Congress.

Modi had come in for a relentless attack from Congress president Rahul Gandhi who alleged corruption in procurement of the fighter jets for the Indian Air Force from French aerospace major Dassault Aviation, calling it a scam which allegedly benefitted industrialist Anil Ambani.

Holding it did not find any substantial material on record to show there was "commercial favouritism" to any party by the Indian Government in choosing an offset partner, a bench headed by Chief Justice Ranjan Gogoi said perception of individuals cannot be the basis of a "fishing and roving enquiry" by the court and it cannot "sit in judgement" over the wisdom of the decision to go in for purchase of 36 aircraft in place of 126.

"We are satisfied that there is no occasion to really doubt the process, and even if minor deviations have occurred, that would not result in either setting aside the contract or requiring a detailed scrutiny by the court," it ruled.

Shortly after the verdict that comes ahead of the 2019 Lok Sabha polls was pronounced, BJP president Amit Shah launched a blistering attack on the Congress, saying it was a "victory of truth" and demanded an apology from Rahul Gandhi. The court decision is a slap on the face of those who had alleged corruption, Shah told reporters.

But the Congress claimed the Supreme Court has vindicated its stand that the issue of "corruption" in the Rs 36,000 crore Rafale contract cannot be decided by it and challenged the Centre to constitute a joint parliamentary committee to probe the deal.

Rahul Gandhi stuck to his allegation there was massive corruption in the contract and wondered why the CAG report on the deal was not yet shared with the Public Accounts Committee of Parliament even though it was cited by the apex court.

At a news conference, Gandhi also reiterated the Congress' demand for a JPC probe and claimed if it was conducted the names of Narendra Modi and businessman Anil Ambani will crop up. Both the government and the Ambani's Reliance Group have been outrightly rejecting Gandhi's allegations of any wrongdoing.

Finance Minister Arun Jaitley maintained only a judicial body can carry out such a probe as there has been an experience in the past of JPCs working on partisan lines.

"The SC verdict is conclusive and leaves no scope for any doubt on the deal,"he asserted at a joint news conference with Defence Minister Nirmala Sitharaman. Jaitley dubbed allegations on the Rafale deal as "fiction writing" that compromised national security,

Sitharaman said the matter of Rafale deal has been put to rest through the court verdict.

Senior Congress leader Jyotiraditya Scindia insisted the verdict is not a "setback" for the Congress as the Rafale deal is still an issue in the people's court.

Attorney General K K Venugopal welcomed the verdict terming it as an "excellent" and "very good" judgement, which in his opinion has given "clean chit" to the government by accepting all its arguments.

The apex court gave its 29-page judgement on pleas seeking lodging of an FIR and a court-monitored probe alleging irregularities in the jet deal, in which both India and France entered into an inter-governmental agreement in 2016 after Modi's summit talks with the then French President Francois Hollande in Paris the previous year.

The three-judge bench dealt with "three broad areas of concern" raised in the petitions , identifying them as "the decision ­making process, pricing and the choice of Indian offset partners".

"In view of our findings on all the three aspects, and having heard the matter in detail, we find no reason for any intervention by this court on the sensitive issue of purchase of 36 defence aircrafts by the Indian Government," said the bench, also comprising Justices S K Kaul and K M Joseph.

Holding that the apex court has "constricted power of judicial review", it said "the scrutiny of the challenges before us...will have to be made keeping in mind the confines of national security, the subject of the procurement being crucial to the nation's sovereignty".

Observing that the deal in question did not pertain to construction of roads or bridges, the court said the Indian Air Force needs advanced fighter jets as the country cannot afford to be "unprepared" or "under prepared" in a situation where adversaries have acquired fourth and fifth generation fighter aircraft, "of which, we have none".

The court noted that the process for procurement of 36 Rafale jets was concluded on September 23, 2016 and no questions were raised at that time and the petitions were later filed after reported statement of Hollande with regard to selection of Indian offset partners after he demitted office.

The bench said it was "certainly not the job of this court to carry out a comparison of the pricing details in matters like the present" and the material has to be kept in a confidential domain.

On the offset partner, the bench noted this issue had "triggered" the litigation as petitioners had alleged that government gave a benefit to Reliance Aerostructure Ltd by compelling Dassault Aviation to enter into a contract with them at the cost of public enterprise, Hindustan Aeronautics Ltd.

"We do not find any substantial material on record to show that this is a case of commercial favouritism to any party by the Indian Government, as the option to choose the IOP (Indian offset partners) does not rest with the Indian Government," it said, adding it is neither appropriate nor within the experience of the court to step into this arena of what is technically feasible or not.

It said "mere press interviews or suggestions" cannot form the basis for judicial review by the court, especially when there was categorical denial of the statements made in the press by both the sides.

Anil Ambani, the Reliance Group Chairman, said the verdict established the "falsity" of politically motivated allegations against his firm.

Former Union ministers Yashwant Sinha and Arun Shourie along with activist advocate Prashant Bhushan moved the court with a plea for a direction to the CBI to register an FIR for alleged irregularities in the deal. Before them advocates M L Sharma and Vineet Dhanda and AAP leader Sanjay Singh had also filed pleas.

Accusing Rahul Gandhi of misleading people and endangering national security by raising questions on the Rafale deal at every meeting, Shah asked him to disclose the source of information on which he had based his allegations.

Congress chief spokesperson Randeep Surjewala said the party had stated earlier that the Rafale issue cannot be decided by the Supreme Court.

"If they have nothing to hide, I challenge Modi ji and his government to submit to a JPC probe which will question and go into the corruption in the defence deal," he said.

In a veiled attack on Gandhi, Jaitley said "disrupters" have lost on all counts and those who manufactured falsehood compromised the security of the country.

The court verdict also echoed in Parliament where the government launched a counter-offensive on the opposition.

Home Minister Rajnath Singh demanded that Rahul Gandhi apologise on the floor of the House for "misleading" the country on the Rafale deal.

What the SC said in its Rafale deal judgment

>> We don't find substantial matter to interfere with issue of procurement, pricing and offset partner in Rafale jet deal

>> No substantial evidence of commercial favouritism to any private entity

>> Questions raised on Rafale deal only after ex-French president Hollande came out with statement, which can't be basis of judicial review 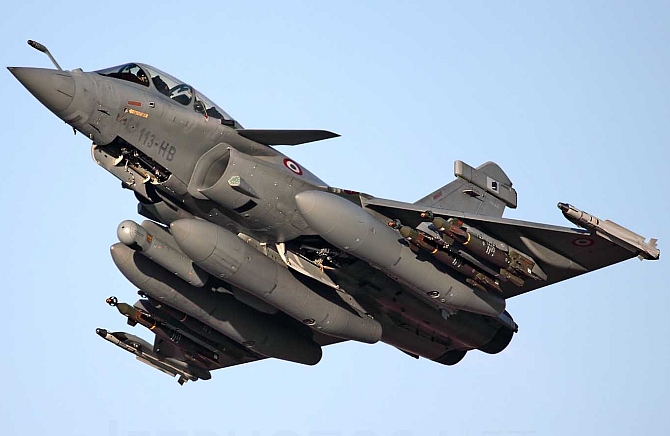