The Supreme Court Wednesday declined to grant interim protection from any coercive action to Ali Abbas Zafar, Director of web series Tandav, and others seeking quashing of first information reports (FIRs) against them for allegedly hurting religious sentiments of Hindus and issued notices Uttar Pradesh, Madhya Pradesh and other states on their pleas. 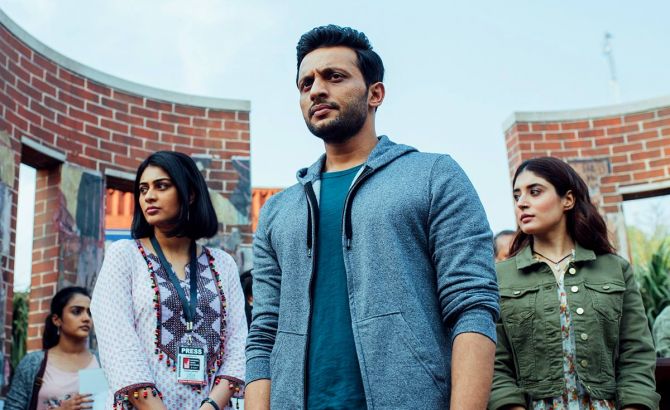 Observing that 'freedom of speech and expression is not absolute' and is subject to restrictions, the top court said Zafar, Amazon Prime India head Aparna Purohit, producer Himanshu Mehra, the show's writer Gaurav Solanki and actor Mohammed Zeeshan Ayyub may seek bail from courts concerned in the FIRs lodged in connection with the web series.

A bench comprising justices Ashok Bhushan, R Subhash Reddy and M R Shah, hearing as many as three separate petitions on behalf of the makers and others connected to the web series, issued notices to Uttar Pradesh, Madhya Pradesh, Karnataka, Maharashtra, Bihar and Delhi and the police officers probing the complaints.

They have sought either quashing or clubbing of the FIRs lodged in several states on various grounds including that the objectionable scenes have already been removed from the political thriller.

"We cannot use the power under section 482 CrPC (power of courts to quash the criminal case). We are not inclined to grant interim protection," said the bench at fag end of the hearing conducted through video-conferencing.

They primarily sought reliefs as granted to TV anchors Arnab Goswami and Amish Devgan in criminal cases, saying the cases lodged in various states against them be clubbed and they be granted interim protection from arrest otherwise they will be made to run from one place to another in the country for the same alleged offence.

"At the end of the day this is a single offence. If a murder is reported for 100 times then there cannot be 100 offences. It is a genuine innocent case. Everyday there is an FIR where will a man go? At least club them in one place," Rohatgi argued.

In response to a question as to why the pleas have not been filed in a high court, Nariman said that FIRs have been filed several states and the number is rising every day.

Agrawal, appearing for Ayyub, defended the alleged objectionable part of the web series saying that as an actor, he has no artistic control over dialogues spoken by him.

"You cannot take up role without reading script. You cannot play role hurting religious sentiments of others," the bench remarked.

Rohatgi said petitioners needed protection as they might be arrested by six different state polices.

"People are now offended by everything. The Petitioners reside in Bombay. Why will they go to different states? In Arnab Goswami case, the court had said that violation of 19(1)(a) could allow us to approach the Supreme Court, " he said, adding that the freedom of speech and expression is the most zealously guarded right.

Even though the right to freedom of speech and expression is not absolute, the petitioners should not be subjected to this kind of harassment, Luthra argued and referred to judgements to highlight the argument that there cannot be 'more than one FIR' for the same allegations.

"The series is an analytical series about political issues, social issues. Even though there was no objectionable content, we removed them after complaints. People when they see the series on the OTT platform, they consent to see it," the senior lawyer said.

The bench said that it cannot decide under writ jurisdiction whether any offence is made out or not.

Earlier, the Bombay high court had granted a transit pre-arrest bail to Zafar, Purohit, Mehra and Solanki against whom a case was registered in Lucknow for allegedly hurting religious sentiments through the web series.

The four have been booked in Lucknow under sections 153 A (promoting enmity between different groups on grounds of religion, race and so on), 295 (injuring or defiling place of worship with intent to insult the religion of any class), 501 (1)(B) (public mischief with intent to cause fear or alarm) of the IPC and under relevant sections of the Information Technology Act.

At least three FIRs have been lodged against the makers and artistes of Tandav in Uttar Pradesh -- at Lucknow, Greater Noida and Shahjahanpur -- for the alleged inappropriate depiction of UP Police personnel, deities, and adverse portrayal of a character playing the role of prime minister in the show.

Similar FIRs have been lodged against people associated with the making and airing of the web series in states like MP, Maharashtra and Karnataka.