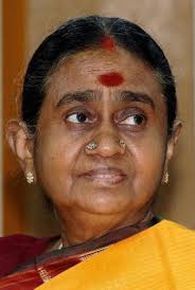 The Supreme Court on Wednesday directed AIIMS director to constitute a medical board to examine whether Dravida Munnetra Kazhagam chief M Karunanidhi's wife Dayalu Ammal is medically fit to depose as a witness before a Special CBI court in a 2G scam case.

A bench of justices G S Singhvi and K S Radhakrishnan said that the medical board, comprising of three doctors including a neurologist, is to be constituted within a week and it will submit a report before the apex court within three weeks thereafter.

The bench passed the order on a plea filed by Dayalu Ammal's daughter Selvi seeking court's direction to exempt her mother from appearing before the trial court as prosecution witness on medical ground.

She pleaded that a medical board be constituted to find out whether her mother is physically and mentally fit to come to Delhi from Chennai to depose before the special CBI court.

Senior advocate Abhishek Manu Singhvi, appearing for the petitioner, contended that Ammal had been diagnosed with cognitive and behavioural abnormalities in June last year and that she is progressively and gradually losing recognition of even her near and dear ones and is unable to move out of the house on her own.

In the petition, it has been submitted that due to her physical and mental condition, Ammal is prone to "abrasive behaviour, clumsy habit with sudden hitting or punching people, inappropriate talk and action and inability to take care of day-to-day activities".

The petition has been filed against the special CBI court's order refusing to exempt 82-year-old Ammal from appearing as a witness in the case.

The plea for exempting Ammal from appearing as a prosecution witness had earlier been moved in the Delhi high court which on July 4 asked her to move the apex court for relief, as the 2G case is being monitored by it.

The special CBI court had on May 31 dismissed Ammal's exemption plea, saying she is an "important witness" as she was a director in Kalaignar TV Pvt Ltd in which an alleged bribe amount of Rs 200 crore was received.

The trial court's order assumed significance as Karunanidhi's daughter and DMK MP Kanimozhi and Sharad Kumar, managing director of the TV channel, are facing trial in the case along with former Telecom Minister A Raja, DB Realty Ltd MD Vinod Goenka and others.

CBI had, in its charge sheet, dwelt on the routing of over Rs 200 crore illegal gratification from M/S Dynamix Realty to Kalaignar TV Pvt Ltd through M/S Kusegaon Fruits and Vegetables Pvt Ltd and Cineyug Films Pvt Ltd.