The Supreme Court on Wednesday allowed Communist Party of India-Marxist general secretary Sitaram Yechury to visit Jammu and Kashmir to meet his party colleague and former MLA Mohammed Yousuf Tarigami, while brushing aside the Centre's claim that it might 'endanger the situation' in the state. 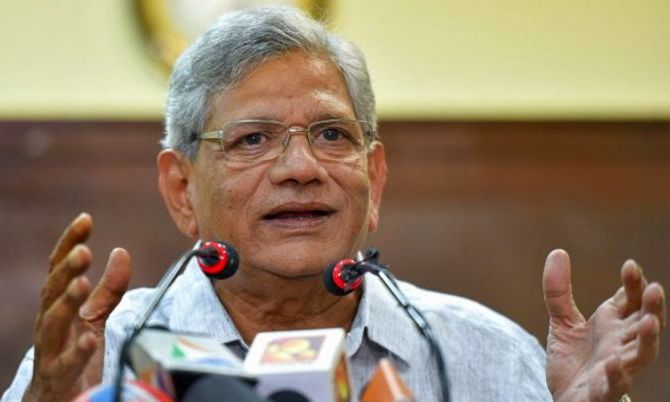 "Why do you have any difficulty if a citizen of this country wants to go there and meet his friend and party colleague?," a bench headed by Chief Justice Ranjan Gogoi asked Solicitor General Tushar Mehta, who was opposing Yechury's visit to the state.

"If a citizen wants to go to a part of his country, he is entitled to go," the bench, also comprising justices S A Bobde and S A Nazeer, said.

The court said this after Mehta said Yechury's visit might affect the prevailing situation in Jammu and Kashmir and the issue might become political.

"This may endanger the situation. The situation is becoming normal there," Mehta told the bench, adding that the Left leader's proposed visit to the state 'appears to be political'.

The apex court made it clear that Yechury was allowed to visit Jammu and Kashmir to meet his party colleague only and if he was found to be 'indulging in any other act of omission and commission, it will be construed to be a violation of this court order'.

The apex court made it clear that Yechury was allowed to visit Jammu and Kashmir to meet his party colleague only as attention has been drawn to an interim application seeking orders from the court for bringing Tarigami to the All India Institute of Medical Sciences, New Delhi, for better medical facilities.

The bench said if he was found to be 'indulging in any other act of omission and commission, it will be construed to be a violation of this court order'.

Yechury's counsel told the top court that he was willing to give an undertaking that he would not indulge in any other activity other than meeting Tarigami and enquiring about his well-being.

Senior advocate Raju Ramachandran, appearing for the Communist Party of India (Marxist) leader, said Tarigami was a four-time MLA of the Jammu and Kashmir Assembly and he had last spoken to Yechury over phone on August 4, during which he had indicated that his health condition was "poor".

"I (Yechury) am the general secretary of the party. He (Tarigami) is a four-time MLA of our party. I am concerned about him," the senior lawyer said.

When the bench said it would allow Yechury to go to Jammu and Kashmir to meet Tarigami, Ramachandran said, "I (Yechury) had gone there earlier also. They (authorities) did not allow me to go out of the airport."

To this, the bench said, "You go there. We will pass order. You go there and meet your friend, nothing else."

When Ramachandran referred to the poor health condition of Tarigami, Mehta said according to the information he had, the former MLA was "hale and hearty", adding that he could place the medical records of the CPI-M leader before the apex court.

Ramachandran told the bench that as far as he knew, Tarigami had residential addresses in Kulgam and Srinagar and the CPI-M was not aware of his whereabouts.

Mehta said Tarigami was a 'Z' Category protectee and there should not be any apprehension about his safety and security.

The bench asked Yechury to report back to the court by filing an affidavit about what transpired there.

Yechury filed a petition in the apex court seeking production of Tarigami, who has allegedly been detained in Jammu and Kashmir since the Centre abrogated provisions of Article 370 of the Constitution which accorded a special status to the state.

In the order, the bench categorically said, "On due consideration, we permit the petitioner (Yechury) to travel to Jammu & Kashmir for the aforesaid purpose (medical) and for no other purpose."

The apex court directed Imtiaz, Senior Superintendent of Police, Security in Jammu & Kashmir to facilitate the travel and help Yechury in locating the whereabouts of Tarigami, if required.

"No sooner the petitioner (Yechury) comes back to Delhi, he will file a report supported by an affidavit in connection with the purpose of the visit as indicated in this order," the bench said.