The Supreme Court on Tuesday permitted the Mumbai Metro Rail Corporation Ltd to pursue its plea with the relevant authority for felling 84 trees at Mumbai's Aarey Colony for constructing train ramps at its car shed project, saying it cannot be "oblivious of serious dislocation" which may be caused in projects involving "large public funds". This significant order would enable the MMRCL to seek permission for felling of 84 trees from the tree authority to start its construction work, which has been stalled for quite some time now and, according to Mumbai Metro, the project cost has escalated from Rs 23,000 crore to Rs 37,000 crore.

"The MMRCL should be permitted to pursue its application before the tree authority for felling of 84 trees. Let the tree authority take a decision independently," a bench comprising Chief Justice D Y Chandrachud and Justice P S Narasimha said.

It noted down rival contentions in detail and said, "It is in this backdrop the court must consider the proposal by MMRCL. Alternatively, there is a wider issue. In such projects involving large public funds, the court cannot be oblivious of serious dislocation which may be caused."

"Undoubtedly issues pertaining to the environment are important. The state government which had taken a decision in the first place to accept the technical committee report, later on changed its view while deciding upon realignment," it noted.

The top court fixed the batch of petitions, including the suo motu (on its own) one, for final hearing and disposal in the first week of February next year.

It took note of the submissions of Solicitor General Tushar Mehta, appearing for the MMRCL, that almost 95 per cent work on the project has been completed.

"It would not be possible for the court to stay the decision. Moreover, it must be noted that substantial no of trees have already been felled... As already noted earlier 2144 trees were fell in executing work for the car depot. What is now sought is a permission to apply to tree authorities for felling of trees for ramp. Without the ramp, work done would be of no use," the CJI said in the order.

At the outset, the top law officer said the plea of the MMRCL was pending with the tree authority which is not proceeding due to the pendency of the petitions here in the Supreme Court.

"The original total cost of the project was Rs 23,000 crore. The MMRCL has already invested Rs 22000 crores. Because of the delay caused by the litigation, the cost has escalated to Rs 37000 crores," Mehta said.

He then listed out the benefits and the impact of the metro rail project saying the carbon emission, due to less vehicular traffic, would come down.

Above 13 lakh passengers may travel through the metro and may lead to ease in traffic situation, fuel consumption and air pollution, he said, adding that every day, nine persons die in train accidents in Mumbai.

"Rate of growth of cars will keep on increasing. People will continue having cars. See what happened in Delhi. You have the peripheral way but that does not mean that the city will get de-clogged," the bench observed.

"The extrapolation that the people will stop driving cars, fuel consumption will go down. It does not help. Reduction happens when you do something like Singapore -- make it so uneconomical to have cars," it said.

The plea sought felling of 84 trees and no one would gain anything if the public project is stalled and moreover, serious  prejudice would be caused to the public if it is stopped.

He said that if asked, trees may be translocated and fresh saplings would be planted.

Senior advocate C U Singh opposed the submissions of the MMRCL saying that if the trees felling was allowed then the matter will become infructuous.

"They have already cut 2241 trees for the car depot," the CJI quipped.

"This Rs 23,000 crores is for the entire project of 10 metro lines of which line 3 is one line. This has escalated to Rs 37,000 crores on account of market factors and it has nothing which has nothing to do with the car shed," Singh said.

Referring to a report of the chief secretary of Maharashtra, he said the committee had reported that Kanjurmarg is the "most preferred site" for the metro car shed.

This is a reserved forest and the decision to realign it was based on a detailed committee report, he said, adding that 67 percent of transplanted trees have died, he said

The MMRCL had on August 5 told the apex court that no trees have been cut in Aarey colony since October 2019.

The apex court had in 2019 taken suo motu cognisance of a letter petition addressed to the Chief Justice of India by law student Rishav Ranjan seeking a stay on the felling of trees in the colony.

It had restrained the authorities from felling any more trees after the solicitor general submitted on behalf of Maharashtra that no further trees will be mowed down.

The felling of trees in the colony has been opposed by green activists and residents.

Incidentally, Thackeray, immediately after becoming the chief minister in November 2019, had announced a stay on the construction of the proposed project and later ordered it shifted to Kanjurmarg.

The Bombay high court in October 2019 refused to declare Aarey Colony a forest and declined to quash the Mumbai municipal corporation's decision to allow the felling of over 2,600 trees in the green zone to set up the metro car shed. 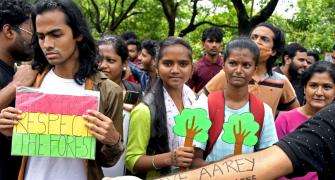 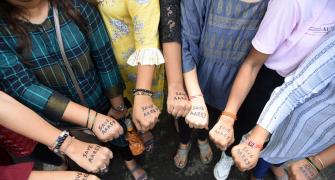 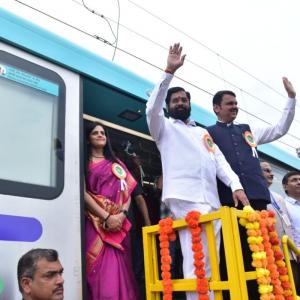