The Supreme Court on Wednesday refused to stay the direction of the Maharashtra Governor to the 31-month-old Maha Vikas Aghadi government to take a floor test in the Assembly on Thursday to prove its majority after which the beleaguered chief minister Uddhav Thackeray quit office. 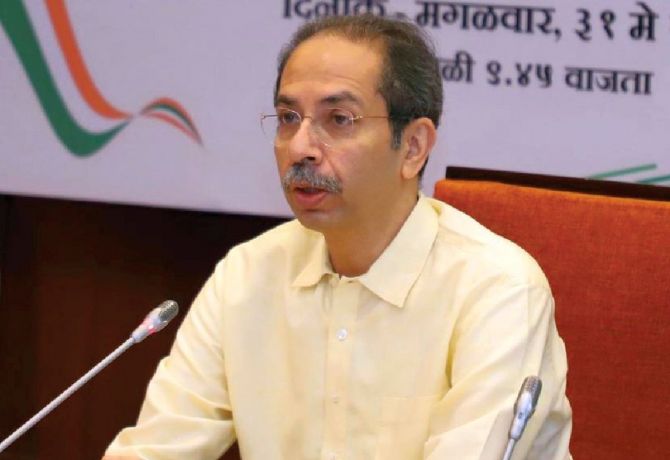 Observing that the floor of the House is the only way to settle such "issues of democracy", a vacation bench of Justices Surya Kant and J B Pardiwala, in a rare hearing that began at 5 pm after the court hours, was vehemently asked by the Shiv Sena to defer the floor test on various grounds. The Thackeray camp said heavens will not fall if the floor test is not held on Thursday.

Governor Bhagat Singh Koshyari had earlier in the day ordered that the floor test be held at 11 am on Thursday, a development that led the Shiv Sena chief whip Sunil Prabhu to rush to the apex court to challenge the direction amidst the nine-day political imbroglio sparked by the intra-Shiv Sena power struggle involving the chief minister and the senior rebel minister Eknath Shinde.

Thackeray, 61, announced his resignation in a webcast, saying he was not interested "in playing the numbers game".

"We do not find any ground to stay convening of the Special Session of the Maharashtra Vidhan Sabha on June 30, 2022, i.e, tomorrow at 11.00 am. with the only agenda of a trust vote. The proceedings of the trust vote to be convened on June 30, 2022 shall be subject to the final outcome of the instant Writ Petition as well as other Writ Petitions. The Special Session of the Maharashtra Vidhan Sabha shall be conducted in accordance with the directions as contained in the communication dated June 28, 2022 of the Governor of Maharashtra," the bench said in its order.

The top court issued notice to the Secretary of Legislative Assembly and others on plea against the governor's direction and said it will hear on merits along with other cases on July 11. It also clarified that Thursday's proceeding shall be subject to the final outcome of the instant writ petition.

The intense arguments by the parties concerned lasted for three-and-half -hours after which the court rose for about 30 minutes before giving its order at around 9 pm.

At the outset, the Uddhav Thackeray faction, represented by senior advocate A M Singhvi, made a strong case for balancing of equity and deferment of the floor test.

"The governor's order to conduct a floor test with supersonic speed amounts to putting the cart before the horse," the senior lawyer said, adding "Governors are not angels, they are humans and that is why we have judgments like S R Bommai and Rameswar Prasad".

The assembly speaker is always "suspect and political" and "the governor is holy cow as per them," Singhvi said.

"Our understanding is that the floor of the house is the only way to settle these issues of democracy," the bench observed when Singhvi was arguing for the deferment of the floor test.

Countering the charge of Shiv Sena, Solicitor General Tushar Mehta, appearing for the Governor, said, "the floor test can't brook any delay and the governor in totality is satisfied based on relevant materials. The floor test has to be held."

Koshyari, after meeting leader of opposition Devendra Fadnavis, had asked the Maharashtra Legislature Secretary to hold a floor test of the Shiv Sena-led coalition government that included the Congress and the NCP at 11 am on Thursday.

Singhvi questioned the speed with which the governor took the decision and said two MLAs of the NCP are down with COVID-19 while two MLAs of the Congress are abroad and they are asked to participate in the floor test in a day's time.

Allowing floor tests would mean making Tenth Schedule, which deals with the power of the Speaker to deal with defection a "dead letter", Singhvi said, adding that the people who have changed sides do not reflect the will of people and heavens won't fall if the floor test is not held tomorrow.

The bench observed that the Tenth schedule is one of the robust provisions and the court should strengthen it.

Singhvi also argued that the court must not allow a floor test to be held till the deputy speaker decides on the disqualification petition against some rebel MLAs.

Singhvi said if voting is allowed to proceed without determining who all are eligible to vote, it would amount to putting the cart before the horse.

As far as the disqualification issue is concerned, that matter is sub-judice, the bench said, adding "We will determine it. How does the floor test depend on qualification or disqualification? Are these powers interchangeable or inter-related?"

"If the Speaker was allowed to decide, these people who are going to vote tomorrow are not members. This cuts at the root of democracy. These people cannot be allowed to swim in the pool, that too in an irreversible manner," Singhvi said.

Singhvi said there is undue haste and hurry in the governor's decision of floor test and he has to act on the aid and advice of the chief minister.

Whether he does it or not, he certainly cannot act on the aid and advice of the Leader of Opposition, he added.

The bench asked," Are you disputing that 34 members of your party have not signed the letter? Why should we suspect the governor's satisfaction? Why should we take his word for whether these MLAs are of this side or that side?"

Singhvi said there is no verification by the governor.

"Governor keeps the letter for one week. He acts only when the Leader of Opposition meets him," he said, adding that every action of the governor is subject to judicial review.

"The governor could not or did not attempt any verification. He recovered from COVID just two days ago. We wish him good health. The resolution sent to the Speaker was rejected as the authenticity is not verified and it was sent from an unverified email."

Senior advocate Neeraj Kishan Kaul, appearing for rebel MLAs, submitted that pendency of disqualification proceedings before the speaker is no ground to delay floor test.

"Normally parties rush to Court to say hold the floor test because someone else is hijacking the party. Here, the opposite is sought, the party wants no floor test. Where does the natural dance of democracy take place? On the floor of the house," he said.

Kaul said the apex court has said in its decisions that disqualification proceedings have no bearing.

"Floor test is the healthiest thing that can happen in a democracy. SC says the moment a chief minister shows reluctance, it prima facie gives the view that he has lost the confidence of the house."

Kaul said the Thackeray government is in a "hopeless minority" within the party itself.

"The more you delay a floor test, the more damage and violence you do to the Constitution. If you want to prevent horse-trading, the best way to stop is floor test. Why are shying away from this," he submitted.

Kaul said the unfolding situation in Maharashtra requires a floor test and the governor in his discretion has rightly decided to hold it.

Senior advocate Maninder Singh supported Kaul's submissions and said the argument was that the governor acted without aid and advice of the ministers and there are judgments to show that the aid of ministers is not required for floor test.