Opposition parties continued their protest over the suspension of 12 MPs on Tuesday with a 'dharna' in Parliament premises that saw several leaders holding up placards demanding revocation of the action taken. 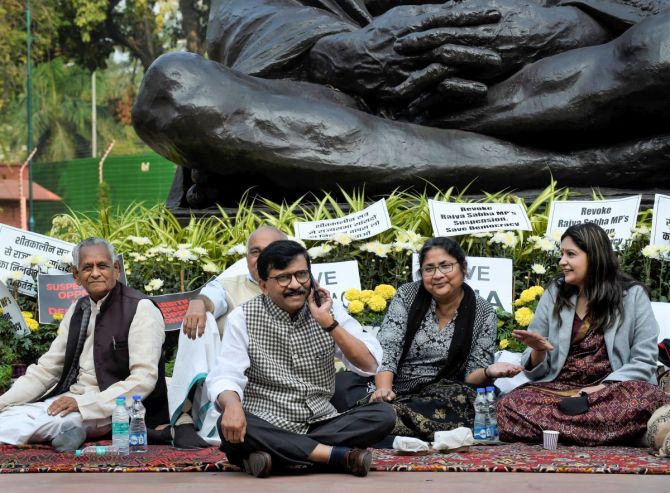 IMAGE: Shiv Sena MP Sanjay Raut sits beside suspended Rajya Sabha MPs who were staging a dharna near the statue of Mahatma Gandhi demanding revocation of their suspension, during the Winter Session of Parliament, in New Delhi. Photograph: PTI Photo

Earlier in the day, Rajya Sabha resumed its proceeding at 11 am. Soon after, it was adjourned for almost three hours till 2 pm.

Thereafter, some opposition members gathered at the place where the suspended MPs along with other colleagues were sitting on 'dharna' holding up placards with slogans such as 'Save Democracy', 'Save India' and 'Revoke Rajya Sabha MPs suspension'.

Opposition members present there were of the view that the issue of farm laws has been resolved but the government is not ready to revoke the suspension of 12 MPs who had protested on the same issue.

Rajya Sabha Chairman M Venkaiah Naidu had adjourned the House proceedings till 2 pm as opposition members tried to raise their issues, essentially the suspension of the 12 MPs.

Some opposition MPs stood up as soon as the official listed papers laid on the table.

Naidu said he has received a notice under Rajya Sabha rule 267, which calls for setting aside the business of the day to take up the issue listed.

He, however, did not state the issue that was sought to be raised.

As some opposition members stood up, Naidu adjourned the proceedings of the House till 2 pm.

On Monday, the Rajya Sabha had witnessed multiple adjournments as the opposition parties including the Congress, the Left and the TMC, demanded the revocation of suspension of 12 of their colleagues.