Sasikala was given VIP facilities in jail, reveals RTI 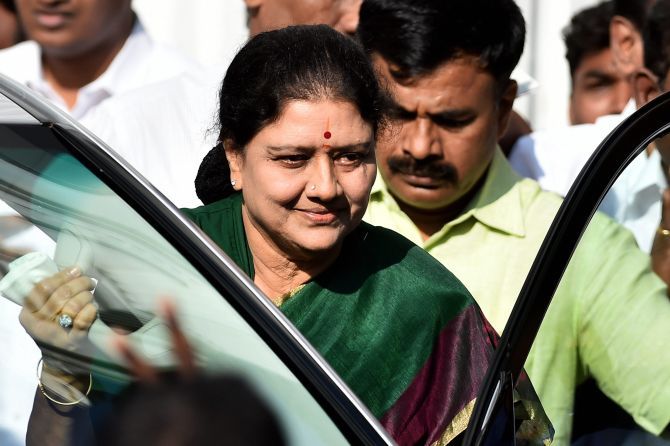 Ousted All India Anna Dravida Munnetra Kazhagam leader V K Sasikala was given special treatment in a prison in Bengaluru, where she is serving imprisonment in a corruption case, according to the report by an inquiry committee that went into allegations by a senior police official, an RTI query has revealed.

The 295-page report by retired IAS officer Vinay Kumar confirmed then DIG (Prisons) D Roopa's claims in July 2017 that Sasikala was given preferential treatment and a separate kitchen functioned for her at the Parappana Agrahara Central Jailhere, RTI activist Narasimha Murthy said.

"I have accessed the 295 pages report through an RTI query. The report confirms that Sasikala was given special treatment in the jail," he said.

The reply was furnished by M R Shobha, public relations officer of the home department.

Reacting to it, Roopa said her stand had been vindicated and said this case could be one of the basis for prison reforms.

"Whatever I had said in my report is the same thing and this was an independent inquiry committee... My stand is vindicated and I am happy for that," she told reporters. The IPS officer said it was because of her efforts and struggle that the report had become public through RTI route.

"Unfortunately my report was not taken on its face value. I was transferred out. People doubted perhaps but now same thing has been said in the report (by the inquiry officer)," Roopa, presently IGP, Home Guards and Civil Defence, said.

The then Siddaramaiah government had ordered an inquiry by Vinay Kumar to probe the allegations made by Roopa after the issue snowballed.

In her report submitted on July 12 to DGP (Prisons) H N Sathyanarayana Rao, Roopa had said there was "a talk" that Rs 2 crore had exchanged hands to give preferential treatment for Sasikala and there were allegations against him also, charge rejected by him.

The issue had caused embarrassment to the then Congress government led by Siddaramaiah which ordered the transfer of Roopa and Rao after both sparred in public.

Sasikala is lodged at Parappana Agrahara central prison in Bengaluru ever since her conviction by the Supreme Court in February, 2017 in the disproportionate assets case along with her two relatives V N Sudhakaran and Elavarasi, all serving a 4-year jail term.

Kumar had submitted his report to the government on November 17, 2017 but its contents were not made public.

The report said Sasikala, close aide of late Tamil Nadu chief minister Jayalalithaa, was allowed to wear her personal clothes and cook. A pressure cooker and spices were found in her prison cell.

It also said there was separate visitors' room for her and the corridor in the jail was barricaded for her.

Sasikala was provided five cells, despite no threat to her life as per intelligence reports, the report said.

The inquiry committee report said Sasikala enjoyed free movement within the prison which was corroborated by video clips. One of the videos showed Sasikala and co-convict Elavarasi going out of the female barrack with a bag in hand, it said.

The videos were submitted to the commission by Roopa along with other CCTV footage from inside the prison.

The report also found that, as per the CCTV footage, Sasikala met with a person in white shirt and white pants for over four hours on June 11, 2017.

According to the prison register, the person is A. Ashokan, her advocate. However, while it was mentioned in the register that she met with him for only 45 minutes the maximum time that a prisoner can spend with a visitor, the CCTV evidence that showed she met him for several hours.

The Daily Report (submitted by the chief superintendent of the prison for July 11, 2017) also showed that Elavarasi on that day had seven visitors, but the total time spent by her was recorded as 45 minutes from 2 pm.

"This can only be explained as deliberate misreporting on the part of the concerned prison officials to escape falling within the prohibition of Rule 601 of the Karnataka Prison Manual 1978. In other words, it is a case of
falsification of records, the report noted.

It also found two other similar manipulation of visitor timings.

When asked about the bribery charges made by her, Roopa said a probe by the anti-corruption bureau had been ordered a long time ago and it should be taken to the logical end by punishing the culprits.

Even otherwise, under the Prevention of Corruption Act, since jail was a public place, all the resources there were public resources.

"So causing undue favour to anyone using public resource is itself a punishable under the prevention of corruption Act. So I hope the details will also be looked into,"she added.

Source: PTI© Copyright 2020 PTI. All rights reserved. Republication or redistribution of PTI content, including by framing or similar means, is expressly prohibited without the prior written consent.
Related News: Roopa, Sasikala, RTI, CCTV, Elavarasi
SHARE THIS STORY
Print this article 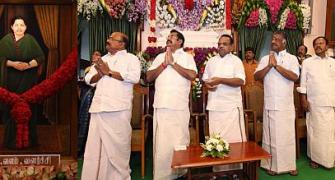 A year in power for EPS, a year in jail for Sasikala 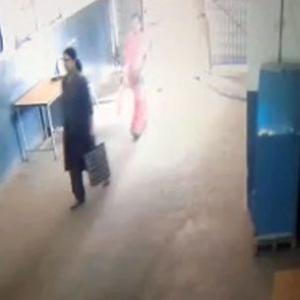 Video shows Sasikala stepped out of jail in civilian clothes