Sasikala to be back in TN on Feb 7, Dinakaran already sees changes 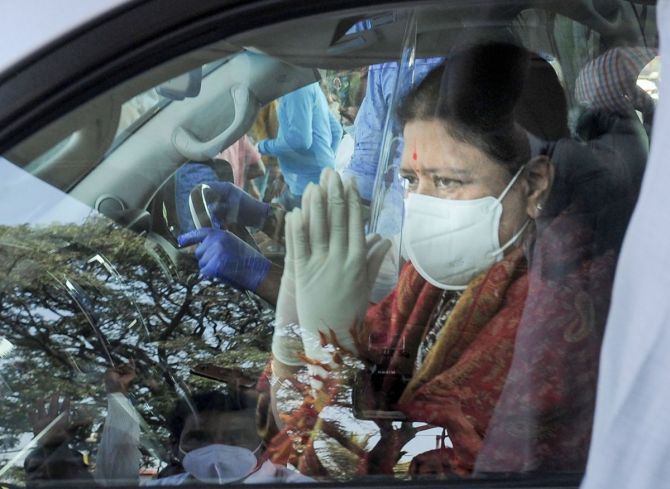 IMAGE: Expelled AIADMK leader V K Sasikala greets her supporters after she got discharged from a hospital, in Bengaluru, on Sunday. Photograph: Shailendra Bhojak/PTI Photo

'Chemical' changes were on in Tamil Nadu, ahead of her arrival, Dinakaran, Sasikala's nephew, said, apparently referring to actions like expulsion of five All India Anna Dravida Munnetra Kazhagam workers for pasting wall posters in her support.

The people and Amma's (Jayalalithaa) true cadres would usher in 'Amma's government again in Tamil Nadu and Chinnamma
(Sasikala) will play a vital role (in elections and in government formation)', he told reporters here and reiterated legal and democratic efforts to win back the AIADMK.

Asked about DMK president M K Stalin's claim that his party was all set to capture power, he said the leader of opposition has been waiting in vain to come to power for about 10 years and it would not happen.

"Amma's cadres will not allow that to happen... people realised more the dangers of the evil force DMK returing to power," he said hitting out at the DMK.

Sasikala was in the Parappana Agrahara Prison in the Karnataka capital from February 15, 2017 and she was set free on January 27 by authorities after completion of her four year prison term in a corruption case.

She was discharged from a hospital after recovery from COVID-19 and she is now taking rest at a resort in Bengaluru as per doctor's advice.

A grand welcome awaited her right from Tamil Nadu's border near Hosur, Dinakaran said and appealed to cadres to ensure that the reception being planned by the party cadres does not cause traffic congestion on the Bengaluru-Chennai highway.

She would start at 9 am on February 7 from Bengaluru and reach 'T Nagar residence' in Chennai by road. He said his aunt told him that she was recovering well.

Though Sasikala had a plan to visit memorials of leaders, C N Annadurai, M G Ramachandran and J Jayalalithaa in Chennai, Amma's memorial there has now been closed.

"I know how many chemical changes are happening in Tamil Nadu as soon as the news of her release broke out," he claimed.

Events like the present closure and opening of the memorial on January 27 when Sasikala was set free were the 'side effects' to her return and it also showed the 'quality' of people behind the move.

For such actions, people would give their verdict in the assembly elections due in a few months, he said.

Anyway, the memorial cannot remain shut and it has to be opened and Sasikala would visit the place to pay homage, the AMMK general secretary said.

Senior AIADMK leader and Fisheries Minister D Jayakumar said the memorial has been temporarily closed only to complete the pending work on a museum and knowledge park that are part of the overall phoenix themed memorial.

Textiles Minister O S Manian too said the public entry has been disallowed to facilitate completion of ongoing work.

To AIADMK leader K P Munusamy's comment that if Dinakaran requested that he be re-inducted into the party (after apologising for his alleged bid to destroy the party and the government) it may be looked into by the party brass, the AMMK leader said time would answer the query.

"Time will tell who indulged in wrongs, who should seek apology and who should be pardoned," he said.

On AIADMK expelling partymen for supporting Sasikala by pasting wallposters honouring her, he said, 'many chemical reactions have surfaced'.

Quoting a proverb, he meant such actions cannot pre-empt support and victory for Sasikala.

The AMMK was founded to retrieve the AIADMK and their goal was also to prevent 'the evil force DMK' from capturing power in Tamil Nadu, he said.

Asked about AIADMK warning of legal action for use of its flag in a car used by Sasikala, Dhinakaran ridiculed it.

Sasikala would continue her legal battle to win back the AIADMK and she is the party General Secretary (GC), he claimed.

A case related to the general council of September 12, 2017 of the AIADMK that abolished the position of GC and her removal from that post was pending before a court, he said.

On the democratic front, the AMMK would make efforts to retrieve the party, he said.

'Sleeper cells' were not MLAs alone, such silent functionaries would continue to operate in AIADMK and do 'the right thing,' and raise their voice at the right time like the people who now stuck posters in 'Chinnamma's' support, he said.

Asked if his aunt would visit the AIADMK headquarters in Chennai and convene the general council to retrieve the party, he said, 'let there be some suspense...wait, you will know'.

When it was pointed out that Sasikala cannot contest polls for six years and what would be her course of action on the political front, Dinakaran said still there were legal avenues and consultations were on with experts to explore options under the law.