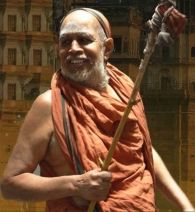 In a huge relief to the pontiffs of Kanchi Sankara Mutt, Jayendra Saraswathi and Vijayendra Saraswathi, a local court on Wednesday acquitted them in the murder case of a temple official in Kancheepuram in Tamil Nadu.

Besides the seers, arraigned as accused 1 and accused 2 respectively in the murder of A Sankararaman, Manager of the Varadarajaperumal temple in Kancheepuram district, 21 other accused were also acquitted by Puducherry Principal District and Sessions Judge C S Murugan.

A total of 24 persons were made accused in the case, but one of them, Kathiravan, was killed early this year.

The judge held that the witnesses failed to support the prosecution case that the two Sankaracharyas – Jayendra, 78, and Vijayendra, 44, -- were part of a conspiracy to eliminate the temple official in September 2004.

The arrest of Jayendra Saraswathi on Diwali day in November 2004 in Andhra Pradesh and later his heir apparent, Vijayendra, came as a big jolt to the Kanchi Mutt and its followers.

The keenly-anticipated judgment was delivered in a packed court, for which security was beefed up in and around the area.

Sankararaman, who was murdered in his office room in the temple on September 3, 2004 using sharp-edged weapons, had levelled charges of financial misappropriation against the two Sankaracharyas.

Police from Vishnukanchi station took up the investigation following a complaint and a case was registered under Section 302 and 34 of the Indian Penal code.

Cases were registered against the two seers under Section 120-B (criminal conspiracy) and 302 (murder) of the IPC in connection with the murder.

Reacting to the judgment, Sankararaman's son Anand said the verdict was "shocking and unbelievable".

The family will go through the judgment and decide on the next course of action, he said.

The seers' counsel said the prosecution had failed to prove the conspiracy charge and the witnesses, including Sankararaman's daughter Uma Maitreyi, had failed to identify the accused.

With no material or evidence "this is not a fit case for appeal," one of their counsel, K M Subramaniam, said.

Lakshman Reddy, another of the seers' counsel, said no witness or documents were there to prove the involvement of the Sankaracharyas.

Earlier, it was alleged that the pontiff hatched a conspiracy to eliminate Sankararaman since he had allegedly made allegations against Jayendra Saraswathi.

The others acquitted in the case include the Manager of the Mutt Sundaresa Iyer, junior pontiff Vijayendra Saraswthi's brother Raghu and K G Krishnaswamy alias Appu.

M Kathiravan, one of the accused, was killed in Chennai on March 21 this year. This brought down the number of accused in the Sankararaman murder case to 23 from 24.

The Special Investigation team of Tamil Nadu police had filed the charge-sheet naming Jayendra Saraswathi as the first accused and Vijayendra Sarawathi as the second accused in the case.

Jayendra Saraswathi was arrested on Diwali day on November 11, 2004 at Mahbub Nagar in Andhra Pradesh. After two months in jail in Vellore, the seer was granted bail by the Supreme Court on January 10, 2005.

Vijayendra Saraswati was arrested from the mutt on January 10, 2005 and the Madras high court granted him bail a month later.

The Sankaracharyas moved the Supreme Court and got the case transferred to Puducherry in 2005 on the ground that the atmosphere in Tamil Nadu was vitiated.

Ravi Subramanian, a civil contractor of the Mutt, who was among the accused, turned approver. He later turned hostile in Puducherry court on January 21, 2010.

The trial in the case was shifted to Puducherry from Chengalpattu court in Tamil Nadu on an order of the Supreme Court, following a writ petition filed by the senior pontiff.

The Supreme Court stated in July 2008 that the Puducherry government could appoint the public prosecutor to conduct the trial. This direction was given in a petition Jayendra Saraswathi presented in the apex court, where he insisted that once the trial was shifted to Puducherry, the Tamil Nadu government had no authority to appoint its PP.

Subsequently, senior lawyer N Devadoss was appointed as the special public prosecutor to conduct the trial.

The trial in the Puducherry Principal District and Sessions court began on April 2, 2009.

Padma, the widow of Sankararaman, his son Anand Sharma and daughter Maitreyi were among the 189 prosecution witnesses examined during the trial in Puducherry court. Of them, 81 witnesses turned hostile.

Ravi Subramanian, who was an approver in the case earlier, turned hostile during cross-examination. He retracted his earlier statements given before the court and the investigation officers in Kancheepuram.

During the four-year trial in Puducherry, four judges looked into the case.

This is the first time in the legal history of Puducherry that a case from a neighbouring state had been shifted to the Union Territory which comes under the jurisdiction of the Madras high court.

No murder case has perhaps seen as many adjournments as the present case in Puducherry.

Source: PTI© Copyright 2020 PTI. All rights reserved. Republication or redistribution of PTI content, including by framing or similar means, is expressly prohibited without the prior written consent.
Related News: Jayendra Saraswathi, Sankararaman, Puducherry Principal District and Sessions Judge C S Murugan, IPC, Vijayendra Saraswathi
SHARE THIS STORY
Print this article
Who was Sankararaman?
Murder in a temple
The Real Shankaracharya

Holy man in a controversy