Outfits related to labour and agriculture critical of policies, say their voices are not being heard. Archis Mohan reports. 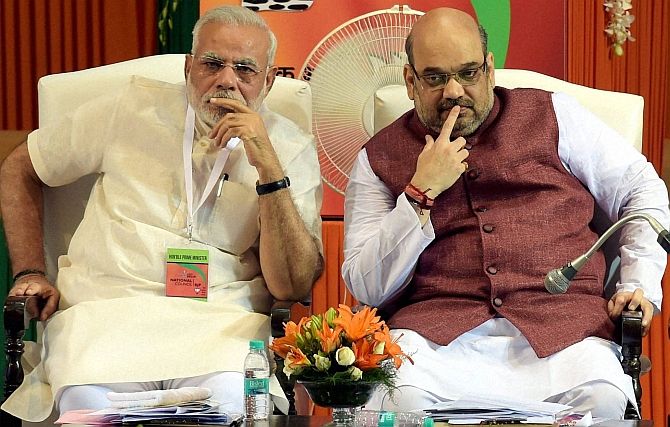 Concerned about losing their support base and peeved at the unresponsiveness of some National Democratic Alliance (NDA) government ministers and senior bureaucrats, Sangh Parivar affiliates want a permanent mechanism, a steering committee of sorts, to discuss issues important both to the Bharatiya Janata Party (BJP) and Parivar outfits such as the Bharatiya Mazdoor Sangh.

These meetings have been attended by senior ministers such as Union minister Nitin Gadkari, party general-secretary Ram Madhav and representatives of the affiliates.

“The baithaks have become talking shops, with each side rattling out future programmes and policies, but with little attempt to empathise with the other’s point of view. Better coordination of all Sangh Parivar mass-based organisations is needed,” said a source privy to the discussions.

The NDA government has attempted to assuage the Bharatiya Kisan Sangh’s concerns about the land acquisition Bill. The nine amendments the government introduced to the Bill were with the Kisan Sangh on board. On its part, the Mazdoor Sangh has felt left out on labour reforms, while the Swadeshi Jagran Manch believes its concerns on economic issues have been ignored.

Sangh Parivar sources said so far, the situation hadn’t come to such a pass that the Rashtriya Swayamsevak Sangh brass be asked to mediate. But they caution the day isn’t far when Sangh Parivar outfits such as the Mazdoor Sangh or the Kisan Sangh, concerned about the erosion of their respective support bases, become more critical of the government.

Mazdoor Sangh general-secretary Virjesh Upadhyay says the government has its limitations. “The intent is there but there are other stakeholders, such as the bureaucracy and industry, which the leadership needs to convince. But there is definitely a need for more frequent meetings between the BJP and affiliates for the people in the government to understand our point of view,” he said.

The Mazdoor Sangh is apprehensive it might end up losing its base to trade unions such as the Centre for Indian Trade Unions, the All India Trade Union Congress and the Hind Mazdoor Sabha. Similarly, the Kisan Sangh is wary of losing its support among farmers on the issue of the contentious land Bill and is against dilution of the consent clause in the legislation.

In September 2014, the Mazdoor Sangh staged protests against various labour reforms by the Vasundhara Raje-led government in Rajasthan.