Yasmeen Wankhede, the sister of Narcotics Control Bureau's Mumbai zonal director Sameer Wankhede, has filed a police complaint in Mumbai seeking registration of an FIR against Maharashtra minister Nawab Malik for allegedly defaming her, an official said on Thursday. In her two-page complaint submitted to the Oshiwara police, Yasmeen Wankhede claimed her family was being targeted on social media and that Malik had also called their family trip to Maldives as a "vasooli (extortion) trip", the official said.

She alleged that Malik was trying to defame her and her family members.

She also claimed that she was being stalked online and the minister was illegally distributing to media-persons her personal photographs posted on her social media handles like Instagram and Facebook, according to the complaint filed recently.

Yasmeen Wankhede also filed a complaint with the National Commission for Women and requested it to direct the police to register a case for the alleged offences of stalking, defamation, criminal intimidation and insulting a woman's modesty, as well as relevant sections of the Information Technology Act for violating her privacy and under sections of the Scheduled Caste and Scheduled Tribes (Prevention of Atrocities) Act.

Malik has repeatedly termed the cruise drugs case as "fake" and levelled a string of allegations against Sameer Wankhede, including illegal phone tapping and forging documents to secure job.

The NCB official has denied any wrong-doing. 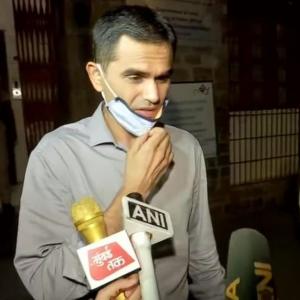