Bollywood’s ‘bad boy’ continues to be a fan favourite despite his many personal troubles. 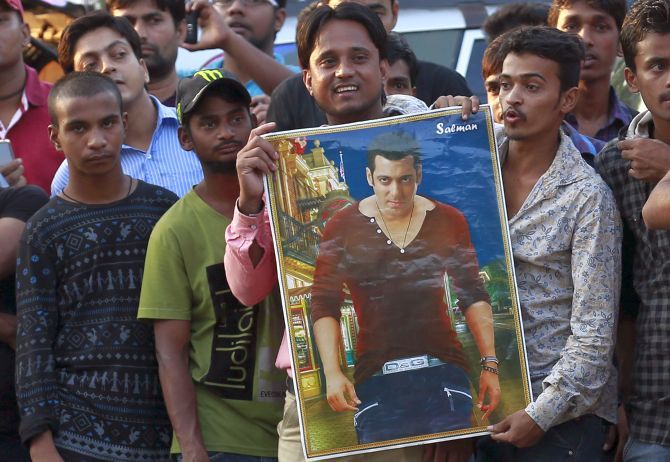 Salman Khan, Bollywood’s ‘enfant terrible’ and arguably its most successful star with an estimated Rs 600 crore riding on him, has long walked the good and bad binary with his larger than life ‘bhai’ image clashing with his controversial personal life.

Bollywood’s ‘bad boy’ through the decades, who was sent to Jodhpur jail on Thursday, has landed in prison for a fifth time on charges ranging from killing deer to a man sleeping on a Mumbai pavement.

The star, mellower perhaps at 52 than he was in 1998, when he killed two endangered blackbucks in a forest near Jodhpur, is rarely out of trouble, often making the headlines with his undiplomatic comments.

Salman first got into a soup while shooting Sooraj Barjatya’s syrupy family drama Hum Saath Saath Hain in 1998 in the desert town of Jodhpur.

On the night of October 1, 1998, Salman and his co-stars in the film, Tabu, Saif Ali Khan, Neelam and Sonali Bendre, allegedly went out in a Gypsy. Salman was at the wheel when he spotted a herd of blackbucks, the Indian antelope, and shot and killed two of them, the prosecution said.

While the other four were acquitted by a Jodhpur court, Salman was taken to the Jodhpur Central Jail from the court. He had earlier spent a total of 18 days in the jail in 1998, 2006 and 2007, all for cases of poaching.

Besides the current blackbuck poaching case, there were two other cases of killing chinkaras and blackbucks, both from the deer family, in two separate places and a fourth case under the Arms Act. He was acquitted in all three cases, except this one, and appeals are pending.

Salman also infamously spent some time in a Mumbai jail for a hit-and-run in Bandra on September 28, 2002, when his white Toyota Land Cruiser allegedly crashed into the American Express Bakery at Hill Road at Bandra, killing one person and injuring four others.

The case continued from 2002 till 2015, when on May 6, the trial court found him guilty and sentenced him to five years’ imprisonment. It was followed by a hearing in the Bombay high court in July. On December 10, the court acquitted him, a verdict that is being appealed by the Maharashtra government.

While the cases piled up in court, Salman courted notoriety on the personal front too.

In 2002, his former girlfriend, actor Aishwarya Rai (now Bachchan), accused him of harassment after they broke up in March that year.

Aishwarya alleged that Salman was unable to come to terms with the split and would constantly call her and pound on her door in an inebriated state. She accused him of “physical, verbal and emotional” abuse.

The always in trouble actor also received flak for claiming in an interview to a Pakistani channel that the 26/11 Mumbai terror attacks were hyped because “elite people” were targeted.

He later took to Twitter and said, “Every human life has equal value and any act of terror, anywhere in the world is unpardonable. Be it 9/11 or 26/11.”

More recently, he compared his exhaustion from a physically strenuous shooting sequence for “Sultan”, in which he played a professional wrestler, to that of a “raped woman”.

Over the last few years, the actor has consciously tried for a course correction to change his image from an industry brat to a generous man involved with various charitable ventures through his foundation, Being Human, which was founded in 2007.

Interestingly, Salman’s star has not dimmed despite his many brushes with the law.

He has been one of the industry’s highest earning stars for almost three decades since his debut film “Biwi ho to Aisi” in 1988.

In the last eight years, only two of his films have not done well. Most of his other films, including “Dabangg” and the “Tiger” franchises, have grossed over Rs 200 crore.

The actor, an early follower of the sculpted body regime, has stayed a bachelor despite many relationships.

“I don’t know how to react. I am numb. I hope he stays strong. His fans will always love him,” said a young fan, standing outside the actor’s home in Mumbai.

Fans and fame have not deserted Salman through the decades, notwithstanding the many ups and downs in his personal life.