Sakshi Maharaj must watch out for this lady

'Sakshi Maharaj hasn't kept a single promise... and we're fed up.'
'Annu Tandon is the only one whom we can turn to in distress.'
Aditi Phadnis reports from Unnao. 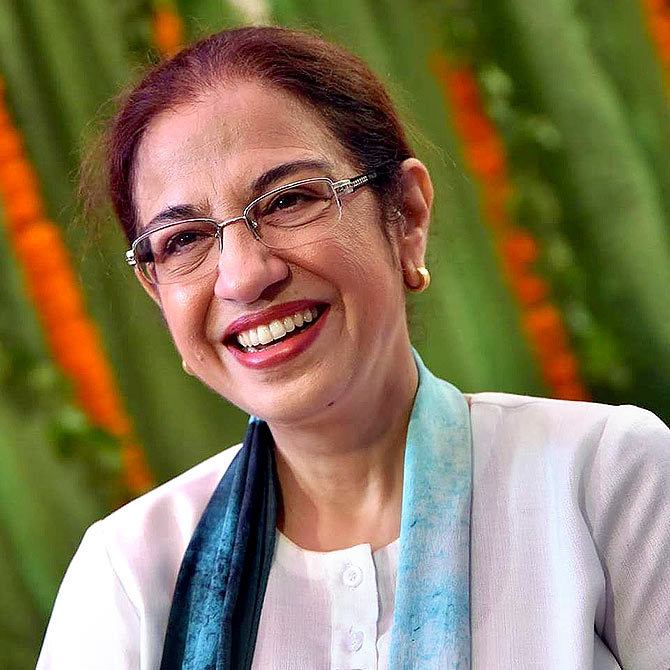 Annu Tandon, the Congress candidate from Unnao, is among 800-odd Khatris in the town.

She has lived and worked in Mumbai, but has a 150-year-old home in Unnao, deep inside a gali.

She's been to college here, and finds it deeply gratifying that "when I go to campaign in villages, I see and greet many who have been my classmates".

Tandon's son Shalin says his mother has done a lot of things: Sold newspapers from door to door -- not just the Observer of Business and Politics, now defunct, to come out of the Reliance India Limited stable, but others as well.

She has run a fabrics business and tried her hand at running a boutique, she has exported clothes, she has also run a software company for a few years (MoTech Software, promoted by Mukesh Ambani)...

Tandon had to make up her career as she kept pace with her husband Sandeep, who was with the Indian Revenue Service and seconded to the enforcement directorate.

Later he left the service and joined RIL.

She contested the 2009 election on a Congress nomination and resigned from the Reliance group.

She was elected to the Lok Sabha from Unnao in 2009.

"Salmanbhai (Salman Khurshid, from the neighbouring Farrukhabad constituency) brought me into politics," she said with the air of making a disclosure.

Not too many would acknowledge a mentor.

Unnao is barely an hour away from Lucknow, but there's no glitz or glamour here: It is dusty, barely developed small town which still has open drains and narrow streets.

It is most famous for the eye hospital in Sitapur, which was set up by her husband's family and is administered by her.

Many locals have benefitted from it.

A local municipal corporator, a Muslim, recalled a little story: "A 30-year old man was diagnosed with cancer. The prognosis was grim. He needed Rs 150,000 for surgery. We managed to collect Rs 65,000. Where would the rest of the money come from?"

"We called Didi. She was in Delhi, really busy with some party work. We explained the problem. She understood immediately, said: Go to the house and give your details. We went to the Fortis hospital the next morning to find the money had already been wired there, and the boy was wheeled straight into surgery."

"Then she called back -- to ask if he had a family and who was taking care of them. It was not charity. It was concern. Till then, not once has she ever referred to that incident in any public meeting." 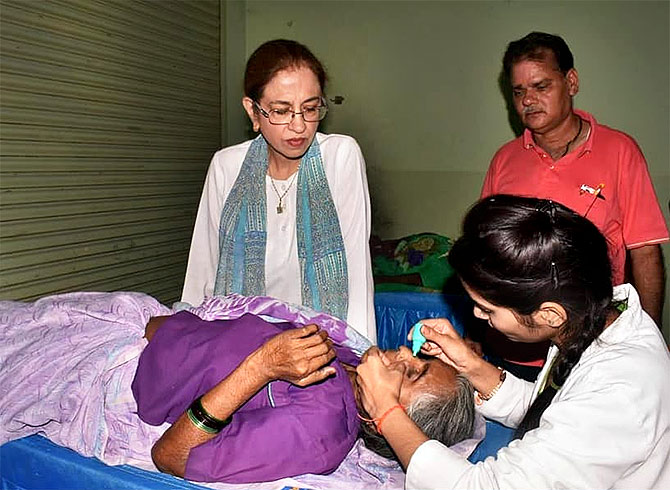 IMAGE: The Sitapur Eye Hospital at Sitapur is administered by Annu Tandon. She is the acting secretary, executive member and trustee. Photograph: Kind Courtesy Annu Tandon/Facebook

M M Shukla, vice president of the Congress in the district, concedes that the Congress ended at number 4 in the 2014 election with Tandon getting 16% of the votes against the BJP's Sakshi Maharaj's tally of 43%.

Arun Shankar (Anna) Shukla of the Samajwadi Party took away 16% and the Bahujan Samaj Party's Brajesh Pathak took away another 16%.

This time, Tandon is fighting without using caste, or community.

Voters in the Muslim area in the town swear by her.

Gobind Gupta has a small garments shop in the market.

He tried and failed to get a Mudra loan to expand his business, badly hit by demonetisation.

"People who talk about India reaching great heights... they should come here and see what life is like," he says.

Tanneries from Kanpur shifted to Unnao, believing pressures would be less.

They were closed down a month before the Kumbh so that the Ganga would be clean for bathers.

They still haven't opened. "there is no employment, migration out of the town is heavy, Sakshi Maharaj hasn't kept a single promise of development... and we're fed up. Annu Tandon is the only one whom we can turn to in distress," he says.

Tandon herself is proud that she belongs to a party that lets her do the kind of politics she believes in. "Grass roots politics in UP is very caste-oriented. But my party encourages me to break free of that mould," she says with serious intensity.

In another corner of the town, there's a cluster of small stalls. All of them are Dalit. All are selling khoa (reduced milk). 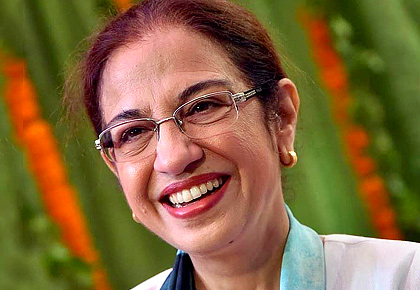