The Shiromani Akali Dal on Saturday said it is 'unfortunate' that even after the party conveyed its concerns to the Bharatiya Janata Party leadership on the three agricultural reform bills, the issue wasn't addressed, and appealed to all political parties to join its 'struggle' against the legislations. IMAGE: Farmers from Punjab detained by police during their protest against the central government, in New Delhi. Photograph: Manvender Vashist/PTI Photo

The SAD also castigated the Congress and the Aam Aadmi Party for allegedly betraying farmers by not opposing the passage of the bills in Lok Sabha.

One of the oldest allies of the ruling BJP, the SAD has come out strongly against the three bills which are meant to deregulate the sale of farm produce.

Harsimrat Kaur Badal, the lone SAD member in the Modi government, resigned as Union minister on Thursday in protest against the bills.

Addressing a virtual press conference in Chandigarh, senior SAD leader and former MP Prem Singh Chandumajra said, "It is unfortunate that even though we expressed our concerns to the BJP and conveyed the sentiments of the farming community to its central leadership, it did not address the issue."

"We, however, will not fail in our duty towards farmers and will continue to strive to ensure justice for them and Punjab," he said.

Chandumajra appealed to all political parties to form 'ek soch aur ek manch' (one thinking and one forum) on the issue, saying Punjab could not afford any division on it.

"All farmer organisations and political parties should support the SAD in its struggle against the bills," he said, adding that in the past, divisions have led to the loss of the state's river waters and its capital.

Chandumajra said the SAD will come out with a party programme against the farm bills.

"We will not sit quietly. We have always raised the voice of the farmers and farm labourers and will continue to do so as per the rich and glorious traditions of the party," he said.

The three bills -- 'The Farmers' Produce Trade And Commerce (Promotion And Facilitation) Bill', 'The Farmers (Empowerment and Protection) Agreement on Price Assurance and Farm Services Bill', and 'The Essential Commodities (Amendment) Bill' -- were introduced in Parliament by the government on Monday.

All these, which were earlier promulgated as ordinances, have been passed in Lok Sabha and will now be tabled in Rajya Sabha.

The SAD has issued a whip to its members in the Upper House asking them to oppose the bills.

Chandumajra accused the Congress and the AAP of trying to deceive farmers on the issue and playing a double game.

"On the one hand these parties are opposing the agricultural bills in Punjab, but they colluded with each other and did not oppose them in Delhi," he said.

"If the Congress and the AAP had insisted on a division of votes on the Essential Commodities (Amendment) Bill, the BJP might have been forced to postpone tabling of the agricultural bills," he said.

The SAD leader alleged that Punjab Chief Minister Amarinder Singh is also guilty of not only becoming a member of the high-powered committee which approved the agricultural ordinances but also of giving suggestions which were in line with the suggested ordinances.

"This amounts to betraying the trust of the entire farming community," he claimed.

Chandumajra said neither Congress president Sonia Gandhi nor AAP convenor Arvind Kejriwal uttered a single word against the agricultural ordinances and both the parties are 'only shedding crocodile tears now'.

Farmers in Punjab and neighbouring Haryana have repeatedly taken to the streets against the farm bills, which they have dubbed as 'anti-farmer'.

They have expressed apprehension that the passage of these bills would pave the way for the dismantling of the minimum support price system and leave the farming community at the 'mercy' of big corporates. 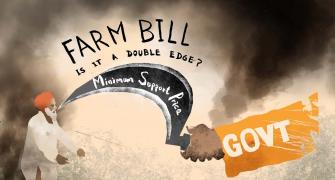 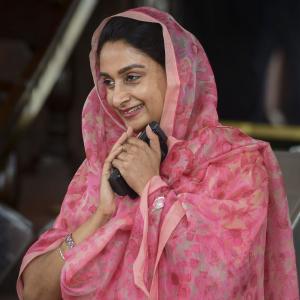