Batting legend Sachin Tendulkar's security cover has been downgraded, while that of Shiv Sena MLA Aaditya Thackeray upgraded to 'Z' category, an official said on Wednesday. 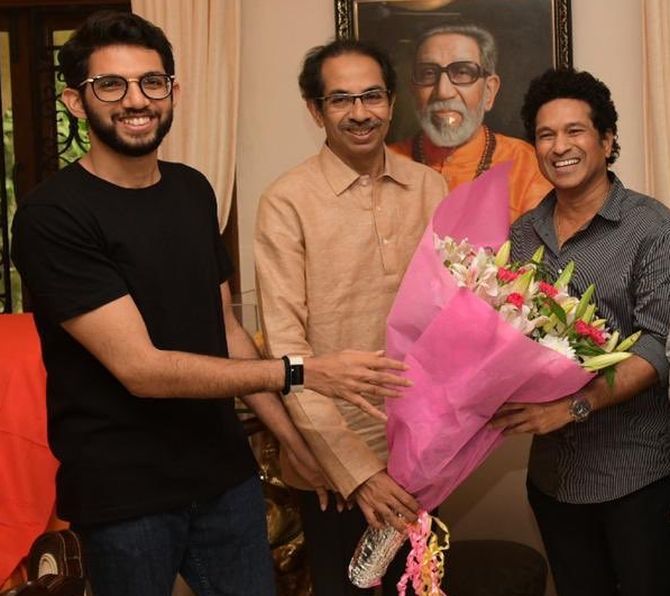 The changes in security cover were made after a review was undertaken by a Maharashtra government committee on threat perception to them, he said.

Besides Tendulkar and Aaditya Thackeray, security cover of more than 90 prominent citizens were reviewed by the committee at a recent meeting, the official said.

Tendulkar, a Bharat Ratna awardee, till now enjoyed X category security which has been withdrawn, he said.

Under X category, a policeman used to guard the 46-year-old cricketer round-the-clock, the official said.

However, the former Rajya Sabha member will be given a police escort whenever he steps out of his home, he said.

Aaditya Thackeray, the son of chief minister Uddhav Thackeray, has been given 'Z' security cover, meaning more personnel will be guarding him now, the official said.

Earlier, the 29-year-old MLA from Worli in central Mumbai had Y+ security cover.

Social activist Anna Hazare's security has been enhanced to Y+ from Z category, the official said.

The security of well-known lawyer Ujjwal Nikam, who represented the prosecution in several high-profile cases like the 1993 Mumbai serial bomb blasts, too, has been downgraded.

Nikam, who previously enjoyed Z+ security, has now been placed in Y category with an escort, the official said.

Several ministers in the erstwhile BJP-led government may also see security downgrades in the coming days, he added.