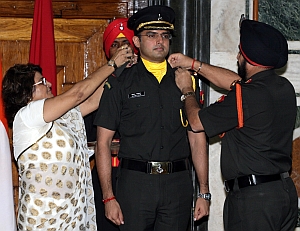 Sachin Pilot on Thursday became the first Union minister to be commissioned as a regular officer in the Territorial Army, fulfilling his desire to follow his father's footsteps to be in the armed forces.

At a ceremony held at South Block in New Delhi, Army Chief Gen Bikram Singh and Sachin's mother Rama Pilot pipped ranks of lieutenant, formally commissioning him as officer in the 124 TA Battalion of the Sikh Regiment.

"This has been my desire to join the Army for very long as I wanted to have my links with the armed forces like my father and grandfather. "I am honoured to part of this family," Pilot said after getting his commission. He said he hoped to contribute meaningfully to the cause of the armed forces.

To a query if his joining TA and drawing wages from there would be construed as an 'office of profit', he said, "The clause of office-of-profit in the Indian Constitution, in that, the Territorial Army is an exception."

"I had considered all these legal aspects before joining the TA," he said. Asked if he would be ready to serve in the armed forces in times of conflict as the TA commission required to do so, he said, "absolutely. I would always be there to serve the country."

On whether he would be able to give due time for the Territorial Army along with his duties as minister of state for information technology, Pilot said he would perform all

his assigned duties in the Unit and all requirements for working in the organisation would be fulfilled.

"I think if educated and young people join any field including politics, this would help," he said when asked whether his joining the TA would in anyway help in improving the image of politics and politicians.

"In the last few years, youths are joining politics at state and panchayat level and I feel this would help in bringing about a positive change in the country," Pilot said.

Thirty-five-year-old Pilot, member of Parliament from Ajmer in Rajasthan, cleared the Preliminary Interview Board at Western Command, Chandimandir and the Services Selection Board at Bengaluru along with his medical examination for joining the TA recently.

His first introduction with the TA took place around two years ago during an orientation program organised by the defence ministry for young Parliamentarians.

Soon after, the Minister expressed his desire to be a part of the organisation and started preparing for it. He followed a rigorous schedule to clear the written examination, interview and physical tests, one of Pilot's close aide told PTI.

The minister, who joined as a regular officer, will have to undergo mandatory training at TA Academy at Devlali in Maharashtra and the Indian Military Acadamy, officials said.

His father Squadron Leader Rajesh Pilot was a fighter pilot in the Indian Air Force and his grandfather served the Indian Army as a Non-Commissioned Officer. Celebrities such as cricketers Kapil Dev, Mahendra Singh Dhoni and actor Mohan Lal have joined the force as honorary lieutenant colonels.