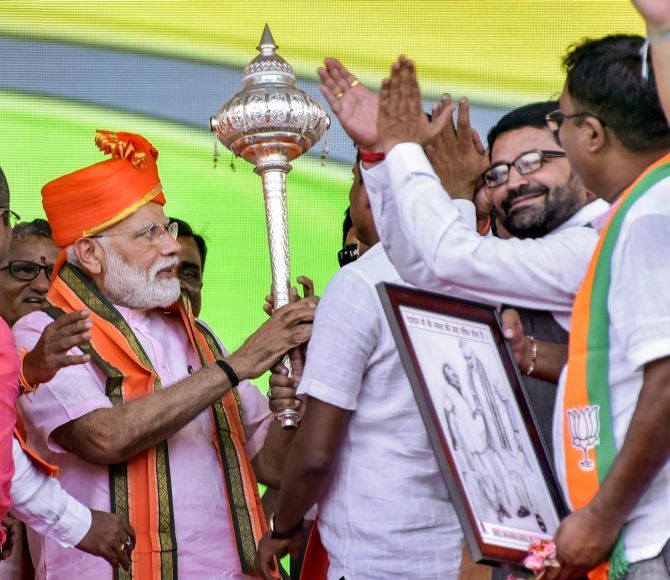 Launching a scathing attack on the Congress and other parties, Prime Minister Narendra Modi on Friday said the Opposition leaders are heroes in Pakistan and are being quoted there to 'discredit' India.

In an apparent reference to Congress chief Rahul Gandhi, who is contesting from neighbouring Wayanad besides his traditional stronghold of Amethi, Modi asked the people of Kerala to be cautious of those who come to the state to 'save themselves'.

He also said the Communists and the Congress have taken the people of the state for granted.

"Beware of those people who come to Kerala not to serve you, but to save themselves. Those who are on bail for tax fraud are coming to Kerala for their own political bail out. When such leaders or their party members come to you for vote, ask them about their performances in their constituencies. They won't have anything to say," Modi said.

He lashed out at the Congress and its 'non-serious attitude' towards national security and said 'they were silent when they had to act'.

When the Congress was in power, the country saw many terror attacks, Modi said.

"Now our forces, successfully eliminate terrorists in their own home, the Congress and the Left question our forces.

"...Today the bare minimum they can do is to show support but they are questioning and insulting the defence forces," the prime minister said.

"Our opposition leaders are heroes in Pakistan where their speeches are being quoted by their leaders to discredit India," Modi said.

Addressing a massive rally, organised by the Bharatiya Janata Party-led National Democratic Alliance, at the beach front here, he said electing the Congress and the Left Democratic Front was like giving licence to its leaders to engage in top-level corruption.

Slamming the Congress for indulging in corruption, Modi said the 'Tughlaq road election scam' has been the talk of the nation.

The money that was being looted was meant to be used to provide nutrition to women and children, he said.

"Imagine how shameless they are," Modi said at the Vijay Sankalp rally.

"Now the entire nation is talking about a very big national scam of the Congress. This is the Tughlaq road election scam.

In Madhya Pradesh, crores of rupees, bags of cash were found. Detailed probes revealed that the money trail reaches the house of a top Congress leader in Delhi's Tughlaq road," Modi said.

The prime minister claimed that the double standards of both the United Democratic Front and the LDF in the state were exposed in the matters of women empowerment and the triple talaq.

Attacking the ruling Communist Party of India (Marxist)-led LDF and the Congress-headed Opposition, Modi said Communists and the Congress have blatant 'double standards' when it comes to women's empowerment.

He said the 'so-called defenders of women's rights' are the ones defending the 'brutal and barbaric' practice of triple talaq.

"But then the so-called liberals, activate their entire network of paid NGOs, paid civil society, groups, urban Naxals, tukde tukde gang to interfere in the faith and traditions of our land," Modi said.

They were trying to make Kerala a laboratory of their 'mischiefs'.

"They call themselves the champions of speech and expression. But deny the same for the people of Kerala."

Both the Fronts think they can destroy traditions, but are mistaken.

"Their lathis, their lies and their disgusting mischief will never be able to destroy our traditions," the prime minister said in an apparent reference to the Sabarimala protests.

The state witnessed frenzied protests after the Left government decided to implement the September 28 Supreme Court verdict allowing women of all age groups to offer prayers at Sabarimala.

Without mentioning Sabarimala in his first campaign speech in Kozhikode after the poll process was notified, Modi said the LDF and UDF will not be able to destroy the traditions.

"Now, in the name of the Supreme Court verdict, some forces have again attempted to destroy traditions for their selfish gains. The attack on our traditions will not be accepted.

"The use of lathis on innocent devotees will not be accepted. It is wrong that in one's own country, one has to face lathis to follow the ancient traditions," he said.

BJP would take all steps to place before the Supreme Court, Kerala's centuries-old traditions in detail. The Centre would also make efforts to provide constitutional protection for the state's faiths and beliefs, Modi said.

The BJP in its poll manifesto had made a mention of the Sabarimala controversy, saying it would 'endeavour to secure constitutional protection on issues related to faith and belief'.

He also took a dig at the Indian Union Muslim League and the Congress leaders and said 'those who have a track record in Ice-Cream Parlour case and the Solar case should not talk on women empowerment as it does not suit them'.

Modi, who arrived here after addressing campaign meetings at Ahmednagar in Maharashtra and Gangavathi in northern Karnataka, said the UDF and the LDF are different only in name but not in deeds.

"For decades, the communist LDF and the communal UDF have dominated the Kerala politics. But they have miserably failed the people of Kerala. BJP presents an alternative ie.inclusive, democratic and compassionate. We will serve each and every citizen," he said.

He said electing the Congress and the LDF was like giving licence for its leaders to engage in corruption.

Candidates from Kasaragod to Palakkad shared the dais with the prime minister at the rally.

Modi is expected to come to the state once more before the April 23 elections.

Tearing into the Congress-Janata Dal (Secular) coalition in Karnataka over its alleged corruption and dynasty politics, Prime Minister Narendra Modi on Friday dubbed it a '20 per cent government', saying their only mission was 'commission'.

Intensifying his campaign blitz in Karnataka, Modi also asserted there was a wave across the country for the return of the BJP-led NDA government in the Lok Sabha polls, which was between 'Rashtravad (nationalism) and Pariwarvad (dynasty)'.

He lashed out at the Deve Gowda family, targeting the JD-S supremo's son Chief Minister H D Kumaraswamy over his reported remark that only those who cannot get two square meals a day seek jobs in the services, terming it an 'insult' to the armed forces.

He also hit out at Gowda's other son and minister H D Revanna, without naming him, for his remark that he would retire from politics if Modi was voted back to power.

The prime minister is addressing back to back rallies in Karnataka, where the BJP has targetted to win 22 of the 28 Lok Sabha seats, riding on what it perceives as a 'Modi wave'.

BJP is also hoping to cash in on mutual hostility between the ruling coalition partners at the grassroot level in several constituencies. The BJP won 17 seats in the 2014 polls.

The prime minister said the 2019 election is between Rashtrawad (nationalism) and parivarwad (dynasty).

"The election was between nation first or family first," he said.

"In Karnataka Congress and JD-S are signs of Parivarwad. Both parties that have lost touch with the people are that much connected to their families...Their only mission is commission," Modi said.

In his campaign during the May 2018 assembly polls, Modi had attacked the then Siddaramaiah dispensation as a '10 per cent commission' government.

The prime minister said he had seen media reports yesterday of Kumaraswamy saying that those who don't get food two times a day join the Army.

"What kind of thinking is this Kumaraswamy ji? You cannot escape by saying that your statement has been wrongly interpreted. You have said what is in your heart," Modi said.

"...is it not an insult to our brave soldiers and armed forces...will you seek vote on this? Those who serve the country and ready to sacrifice for it facing all odds...Such words for them, such thinking. Doob maro doob maro (die drowning), those who insult the country's army," he said.

Modi said such people could not understand the 'tapasya' of the Army as they were born with a silver spoon.

Those who have remained in power for three generations could never understand the poor and their dignity, Modi said.

"This is the thinking with Congress and JD-S and their mahamilavati (adulterated) dal ....(they) don't give importance to the country's security," the prime minister said.

Accusing Congress and JD-S of being against 'Rashtrawadis' and those protecting the country,Modi said they don't feel ashamed in standing with those shouting slogans 'Bharat tere tukde honge' and dream about it.

The prime minister said such people stand with those supporting the secession of Jammu Kashmir from the country.

"They have money for Sultan's utsav, but have shortage of money to remember Hampi's pride," Modi, said referring to the state government's controversial celebrations of 'Tipu Jayanti' on November 10 every year in memory of Tipu Sultan, the 18th century ruler of the erstwhile Mysore kingdom.

On Revanna's remarks that he would retire from politics if Modi came back to power, the prime minister said, "Do you believe them? Will these people speak the truth any time?"

He reminded the crowd that in the 2014 elections, Deve Gowda had himself said that if Modi won and became the prime minister, he would take 'sanyas'.

On the response to his rallies across the country and the surging crows at the meeting in Gangavathi, Modi said, "This scene shows which way the wind is blowing."

"Whereever I have had the opportunity to go across the country, phir rk baar..." Modi said, to which the public roared in unison 'Modi sarkar'.

"This is the voice of the people across the country.There is a wave that is going on. Your love is spoiling the sleep of those sitting in Delhi," he told the surging crowds.

Modi stopped his speech four or five times as the crowds continued to swell and surged forward chanting 'Modi, Modi'.

Referring to the first phase of voting on Thursday, the prime minister said the opposition would not be able to sustain and there was a complete wave of BJP and its allies.

"There is chaos (afra tafri) in West Bengal, they are indulging in killing... but people phir ek baar."

Meanwhile, Karnataka Chief Minister H D Kumaraswamy accused Modi of using the patriotism of soldiers for his gain, saying he has no development issues to talk about during the campaign.

'Despite clarifying on the false post by @BJP4Karnataka, PM @narendramodi still gets carried away by wrong inputs of state leaders.

'The PM is using the patriotism of soldiers for his gain. He rides on such emotional waves because there are no development issues to talk about,' Kumaraswamy tweeted.