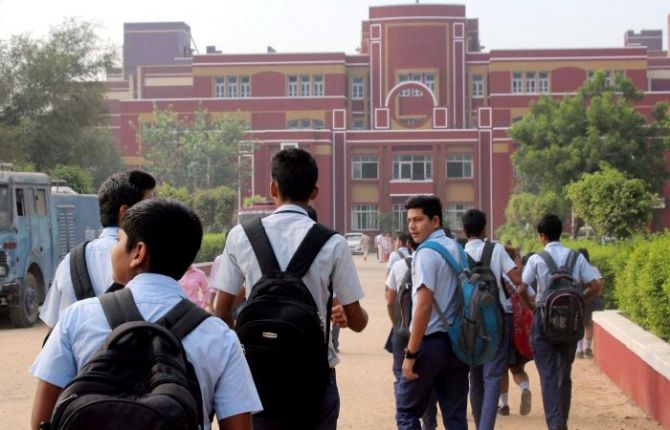 A Class 11 student who allegedly wanted the parent-teacher meeting and exams to be postponed has been apprehended in connection with the killing of a seven-year-old boy in Gurgaon’s Ryan International School, the Central Bureau of Investigation said on Wednesday.

In a sensational twist to the case, the high school student, who is about 16 years old, was apprehended late Tuesday night for allegedly killing his junior inside the school, said a CBI spokesperson.

Pradhyumn, a Class 2 student of the school, was found dead with his throat slit by a sharp-edged weapon on the morning of September 8.

Sources in the agency said the crime was committed in just three to four minutes.

The CBI has not found any evidence so far against bus conductor Ashok Kumar, who was the Gurgaon Police’s sole accused in the gruesome killing, CBI spokesperson Abhishek Dayal said.

The murder weapon, a knife, was found in the commode of the toilet where the killing allegedly took place, he said.

It was the same knife seized by the Gurgaon Police.

According to the agency, the Class 11 student, believed to be weak in his studies, allegedly slit Pradhyumn’s throat to get the school to declare a holiday in order to defer a scheduled parent-teacher meeting and an examination.

The CBI spokesperson said the minor student was apprehended on Tuesday night at 11.30 pm in accordance with the provisions of the Juvenile Justice Act.

“His parents were kept in the loop and all measures in accordance with the JJ Act were complied with. He remains our prime suspect.”

He said the agency analysed CCTV footage, showing the movement of people in and out of the toilet, on the basis of which it narrowed the list of suspects.

The agency has not found any evidence of sexual assault, he said.

The CBI was able to piece together elements of the crime by analysing CCTV footage, scientific and forensic examination, analysis of the crime scene and by questioning students, teachers and staff of the school.

Based on CCTV footage and crime scene analysis, the agency examined all potential suspects and witnesses. The list included 125 teachers and students, sources said.

Ryan Pinto, owner of the Ryan International School chain, is yet to be questioned in the case.

“The probe is still on. The first task was to identify the killer. It was a tough case. By the time the case was given to us, many persons were allowed to use the bathroom. We are questioning the teenager only between 10 am to 5 pm as per JJ Act provisions,” said an official.

The mobile records of all the suspects were scrutinised and examined by the CBI’s special crime team.

Although the Class 11 student had planned a killing on September 8, the “child in conflict with law” had not identified his target, Dayal said.

It was a coincidence that Pradhyumn reached the toilet and became a victim of senior student’s ghastly plan, sources added.

The father of the high school student told a television channel that his son was innocent and they had been cooperating with the police from day one.

“My son didn’t do anything. He informed the gardener and teachers after finding Pradhyumn’s body. He stayed in the school the entire day, and appeared for the exam. There was not even a single spot of blood on my son’s clothes,” the father said, his face pixellated to avoid identification.

Giving details, he said on Tuesday was the fourth time they were called.

“I reached there around 11 am... I left from there at 2 am and CCTV footage can be seen for that,” he said.

The CBI’s findings will be a major embarrassment for the Gurgaon Police, which had blamed Ashok Kumar and alleged that he was waiting in the toilet with a knife.

Kumar, a resident of Ghamdoj village in Sohna, was hired by a school bus contractor around seven months before the killing.

Villagers in Ghamdoj had said Kumar had been framed and he had no previous history of being involved in any crime.

“Now that they have arrested this student, it is proof that the doubt we had about the police investigation was right,” Pradhyumn’s father Varun Thakur told the media.