Russia's Defence Ministry on Saturday said that they are pulling back forces from two areas in Ukraine's Kharkiv region where a Ukrainian counteroffensive has made significant advances in the past week. 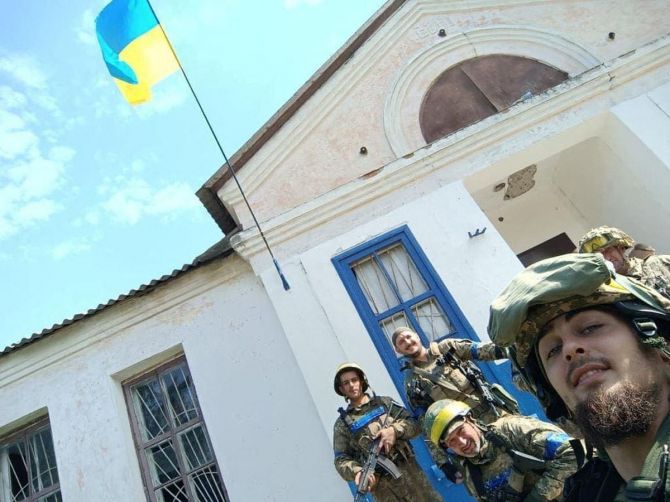 The Russian backed-local authorities in the north Kharkiv region have announced that the Russian military is leaving the area 'temporarily', reported CNN.

The Military-Civic Administration of the Vovchansk district, through which many Russian supplies travel toward the front lines, said in a brief Telegram post, 'Russian military are leaving Vovchansk temporarily. City's population continues to evacuate.'

The administration quoted a member of the Russian parliament, Evgeniy Evtushenko, as saying that the local headquarters would be moved across the border to the Russian city of Belgorod.

"To save civilians' lives, Russian Armed Forces have decided to leave our city. (The) city's administration will be moved to Belgorod. Its branches will be in Kursk, Yakutsk, Vladivostok and St Petersburg till the situation in the city stabilizes," Evtushenko said.

"Russian armed forces will return control of all Russian land in the Kharkiv region," he added.

Vovchansk has been an important link in the Russian military's supply chain from Belgorod, and it remained under Russian control even as Ukrainian forces retook some territory north and east of the city of Kharkiv in May, reported CNN.

In its first response to the gains made by Ukrainian forces in the last few days, the Russian defence ministry has said that 'the decision was made to regroup Russian troops in the areas of Balakleya and Izyum and redirect their efforts in the Donetsk direction', reported CNN.

The ministry said the 'Russian Federation's forces were reduced and redeployed to the DNR (Donetsk People's Republic) over three days', and had 'opened heavy fire on the enemy to prevent incurring losses'.

The ministry did not acknowledge any retreat from Kharkiv, suggesting instead a planned redeployment, reported CNN.

Ukrainian forces appear to have opened a new front against Russian defences on the border of the Donetsk and Luhansk regions.

The head of the regional military administration for Luhansk, Serhiy Hayday, posted a message indicating that the city of Lysychansk was the target of the new offensive, reported CNN.

The city was lost to Russian forces and their allied militia after weeks of fierce fighting in June.

A senior Ukrainian official said that the 'main artery' for Russian forces through the Kharkiv region has been severed.

Yurii Mysiagin, a Ukrainian member of Parliament and deputy head of the parliament's committee on national security, said on Telegram that 'a few days ago, military experts said that the Armed Forces of Ukraine were trying to take the main logistical artery of the Russians in the Kharkiv region under full fire control'.

He said that artery ran from Vovchansk in the north, close to the Russian border, down to Izium, on the border of the Donetsk region -- a distance of some 125 kilometres (approximately 77 miles).

The Ukrainian military says losses have been inflicted on Russian forces in the Kherson region of southern Ukraine as well as in the Kharkiv region, reported CNN.

In an operational update, the General Staff said 'the liberation of settlements that were temporarily captured by the Russian occupiers in the Kharkiv region and the South Buh direction continues. For the safety of our servicemen, official information will be provided later'.

The mayor of Izium in the Kharkiv region, Vladimir Matsokin, has said in a radio interview the city has been liberated, reported CNN.

Matson told a Ukrainian radio station, "Our Armed Forces of Ukraine are in Ilium. It cannot be said that the military operation to liberate Izium is over, but our military is working."

Matson said above the city on the Kremenets mountain 'our blue-and-yellow flag is already fluttering. This has been confirmed'.