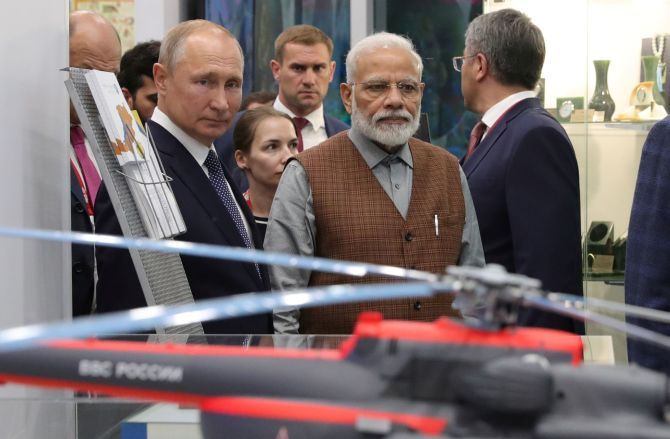 IMAGE: Russian President Vladimir Putin and Prime Minister Narendra Modi tour an exhibition on the sidelines of the Eastern Economic Forum in Vladivostok on Wednesday. Photograph: Sputnik/Mikhail Klimentyev/Kremlin via Reuters

Prime Minister Narendra Modi on Wednesday said that Russia will train the Indian astronauts for the country's ambitious manned space mission -- the Gaganyaan.

The first Gaganyaan flight scheduled for 2022 will carry three astronauts, who will be picked from among the test pilots in the armed forces.

Russia will help train Indian astronauts for the manned space mission -- the Gaganyaan project, Modi said in a joint press meet with Russian President Vladimir Putin after their talks in Vladivostok.

Both Modi and Putin welcomed the active work carried out within the framework of the signed MoU on support of the Russian side for the 'Gaganyaan'.

Last year during Putin's visit to India, the MoU was signed on cooperation on the space mission.

India and Russia also welcomed the increased cooperation between the State Space Corporation 'Roscosmos' and the Indian Space Research Organisation (ISRO), including the human spaceflight programmes and satellite navigation, according to a joint statement.

The two leaders also agreed that it was necessary to exploit to a greater extent potential of India and Russia in launch vehicles development, construction and utilisation of spacecraft for different applications, as well as research and use of outer space for peaceful purposes, including planetary exploration, the statement said.

The ISRO has begun the process of short-listing probable candidates for its first manned mission and it should be completed by next month.

The short-listing is being done in batches and the candidates will be sent to Russia for training after November, a senior ISRO official said in New Delhi last week.

Two unmanned flights and one manned flight will be undertaken as part of Gaganyaan programme.

Russia is one of the three countries -- the other two being France and the United States -- that share robust cooperation in all three strategic sectors of defence, nuclear and space with India.

Indo-Russian space collaboration dates back to four decades. In 2015, the two sides marked the 40th anniversary of the launch of India's first satellite 'Aryabhatt' on a Russian (then USSR) launch vehicle 'Soyuz'.

In 2007, India and Russia signed a framework agreement on cooperation in the peaceful uses of outer space, including satellite launches, Glonass navigation system, remote sensing and other societal applications of outer space.

Modi, arrived in Russia on Wednesday on a two-day visit during which he will also attend the Eastern Economic Forum (EEF). He is the first Indian prime minister to visit to the Russian Far East Region.