News
Business
Movies
Sports
Cricket
Get Ahead
Money Tips
Shopping
Sign in  |  Create a Rediffmail account
Rediff.com  » News » Rushdie to pen down memoirs of his decade of hiding

Rushdie to pen down memoirs of his decade of hiding

Booker Award winning Indian-origin novelist Salman Rushdie has said he plans to pen down his experiences of a decade in hiding, after a death fatwa was issued against him by the Iranian clergy. The novelist of 'The Satanic Verses' unfolded his plans to write about his dark days, while he was living under a death threat at Atlanta's Emory University, where an exhibit of his personal papers opened on Friday.

Rushdie, 62, was forced into hiding in 1989 for a decade after Iran's late spiritual leader Ayatollah Khomeini ordered Muslims to kill him for his book The Satanic Verses, terming it an insult to Islam. The Iranian government said in 1989 that it no longer supported the 'fatwa' but could not rescind it.

"It's my story and at some point it does need to get told," Rushdie told a press conference prior to the opening of his exhibits.

"My instinct is that point is getting closer, I think when it was in the cardboard boxes and dead computers, it would have been very difficult, but now its all organised," the novelist and author of the runaway bestseller 'Midnight's Children' said.

Islamic groups still continue to lodge protest against the famed author, who was knighted in 2007, but Rushdie said the death 'fatwa' is now only more of a rhetoric than a threat.

He described his days in hiding as 'very nasty'. "This was a period in my life where people said very nasty things about me" and "I thought during the time of the attack on that particular novel that the best thing I could do is to keep writing".

Rushdie, whose other works include The Moor's Last Sigh and The Ground Beneath Her Feet, said seeing his work cataloged and on display "brings me a step closer to writing about my controversial life".

Put on display at Emory are his e-mails and letters between 1970 and 2006. The exhibits include letters exchanged between Rushdie and people in the limelight including U2's lead singer Bono and then Senator Barack Obama.

Journals and appointment books describe his creative process and how he developed his characters and non-fiction works.

Personal papers include financial, legal and family records. Rushdie's own 'doodles' speak of his artistic nature, and viewers can also see photographs of Rushdie from his childhood in Mumbai to his current hobnobbing with Hollywood celebrities.

"From the moment I agreed to do this, I knew it was going to be sort of embarrassing," Rushdie said during a media tour of the exhibit.

"The biggest issue for me in the whole discussion with Emory had to do with privacy and the boundaries of privacy. It's not just my privacy at stake, but also other people's," he said. 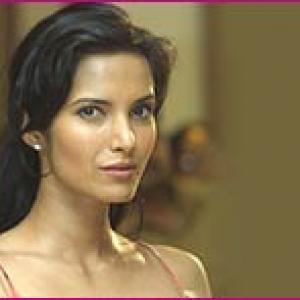 It's a baby girl for Padma Lakshmi