Salman Rushdie suffered multiple stab wounds, including one to the right side of his neck, and was lying in a pool of blood under his body after he was attacked at an event in New York on Friday, according to a doctor who helped the Mumbai-born controversial author following the brutal assault. 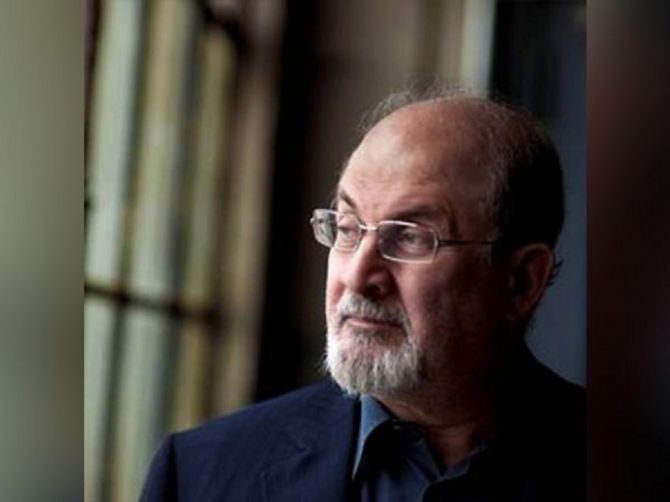 Rushdie was attacked and stabbed in the neck on Friday while onstage in Chautauqua in Western New York, the New York police said.

"Rita Landman, an endocrinologist who was in the audience, walked on stage to offer assistance after the talk. She said that Mr. Rushdie had multiple stab wounds, including one to the right side of his neck, and that there was a pool of blood under his body. But she said he appeared to be alive and was not receiving CPR," The New York Times reported.

Rushdie, who won the Booker Prize for his novel 'Midnight's Children', was seen on the stage with blood on his hands.

The audience tackled the attacker and Rushdie was then treated onstage following the assault.

"The state police are investigating an attack on author Salman Rushdie prior to a speaking event at the Chautauqua Institution in Chautauqua, NY. On August 12, 2022, at about 11 a.m., a male suspect ran up onto the stage and attacked Rushdie and an interviewer," the New York police said in a statement.

David Graves, 78, who was sitting in the middle section of the amphitheater, said Rushdie was still seated when the attacker reached the stage and launched at him. "Things unfolded within seconds," he told the New York Times.

Roger Warner of Cleveland, Ohio, was sitting on the front row at the amphitheater with his wife when Rushdie was attacked.

Warner said he saw a tall, slender man leap onto the stage from the left side and begin attacking Salman Rushdie. He thought the man had punched Rushdie three or four times in the face. Then he saw the blood.

"He was covered with blood and there was blood running down onto the floor. I just saw blood all around his eyes and running down his cheek," Warner wasquoted as saying in the report.

Ibrahim Hooper, a spokesman for the Council on American-Islamic Relations, the country's largest Muslim civil rights group, said he was concerned people might rush to blame Muslims or Islam for the stabbing before the attacker's identity or motive were publicly known.

"American Muslims, like all Americans, condemn any violence targeting anyone in our society," he said.

A suspect was arrested at the scene and is in custody, New York State Police said.