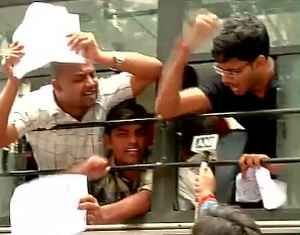 The opposition on Friday created ruckus in Parliament over the issue of regional language aspirants having disadvantage in Civil Services examination conducted by the Union Public Service Commission.

Rajya Sabha was adjourned twice during Question Hour following Opposition's demand for a clarification by no other than the Prime Minister or the Leader of the House on the issue.

The matter figured in Lok Sabha too though it did not lead to any adjournment.

As soon as the Upper House assembled, Congress, Samajwadi Party, Dravida Munnetra Kazhagam and others raised the issue, but Chairman Hamid Ansari asked them to maintain silence for making a reference to the tragic incident in Telengana on Thursday in which 14 students were killed.

The House observed a minute's silence as a mark of respect for the departed.

Soon after, the opposition raised the issue with some even proceeding to the well.

Ansari asked them not to come to the well and they abided by his advice, but vociferous protests went on.

The Chairman's repeated requests to maintain order went in vain and he adjourned the House for 15 minutes.

The scene did not change much when the House reassembled. Some members from treasury benches tried to pacify the Opposition with the assurance that the concerned minister would come to the House and give a statement post noon.

Telecom and Law Minister Ravi Shankar Prasad said the government was serious about the issue.

"Why at 12 and not now?" asked Satyavrat Chaturvedi (Congress) and as the din continued, Ansari adjourned the House till noon.

As soon as the House assembled for the day, RJD members Jay Prakash Narayan Yadav and Rajesh Ranjan Yadav, SP's Dharmendra Yadav and Akshay Yadav, JD-U's Santosh Kumar and Kaushalendra Kumar came to the well and demanded immediate discussion on the issue.

They shouted slogans against the government alleging it had failed to protect interests of students and women.

The Speaker refused to suspend the Question Hour saying the issue had already been discussed in the House earlier and the concerned minister had replied too.

But later, she relented and said she would allow discussion on the UPSC issue during Zero Hour which was accepted by protesting members.