Bharatiya Janata Party leader Kirit Somaiya on Saturday released documents obtained under the Right To Information Act which contradict the claims of politicians that the land on which Adarsh cooperative housing society was built was never intended for defence personnel.

Congress Member of Legislative Council Kanhaiyalal Gidwani and former chief minister Ashok Chavan had previously refuted the allegations of any irregularity in the development of the plot and subsequent allotment of houses to politicians, bureaucrats and their kin. The duo had blamed the media for falsely publicising that the plot was intended for defence personnel and was later overtaken by politicians and bureaucrats.

In 2000, Gidwani, who was a Shiv Sena leader then, wrote a letter to the chief minister, seeking a plot for Adarsh. He wrote, "The society basically of serving and retired defence officers, including officers having served in Operation Vijay at Kargil, have been struggling for allotment of a small piece of land in Block VI of Colaba Division, since a long time."
In his concluding line, Gidwani reminds the chief minister that the plot is being sought for the 'noble cause' in lieu of the defence personnel's service to the motherland

In 2001, Gidwani wrote to the then chief minister Vilasrao Deshmukh: "I request you to kindly expedite the same at your earliest, looking at the genuineness of the case and their sacrifices made for our motherland."

The 'interest of defence and naval officers who are always fighting for the country' was again invoked in 2002 by Gidwani, when he sought the final approval from the government.

According to Somaiya, Deshmukh had mentioned in the file notings 'please expedite' and 'priority to be put up file at once'.
"This is shameful as to how these men used the sacrifices of the armed forces to push their own agenda. We want Deshmukh to resign from the Union Cabinet" said the BJP leader. 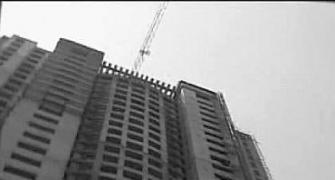 We didn't recommend anyone for Adarsh flat!
Army orders probe into Adarsh scam
The RSS are Nazis, says Digvijay Singh