Biometric systems and CCTV cameras at the server room were not vandalised in the first week of January, contrary to the claims made by the Jawaharlal Nehru University administration that students had destroyed them on January 3, the varsity has said in a Right to Information reply. 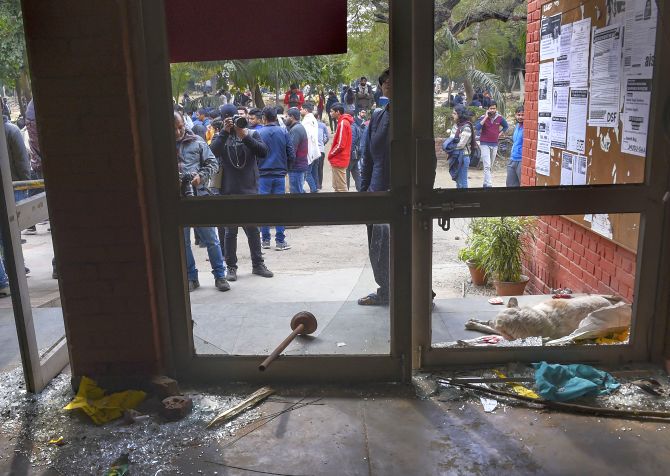 The reply to the RTI filed by Saurav Das, a member of the National Campaign for People's Right to Information (NCPRI), under 'life and liberty' clause, said the main server of JNU at the Centre for Information System (CIS) was shut down on January 3 and had gone down the next day 'due to power supply disruption'.

The varsity's reply also stated that 'no continuous and entire' CCTV footage of cameras installed at north/main gate of the JNU campus from 3 pm to 11 pm on January 5 was available, the day when masked men had entered the campus, and attacked students and teachers with iron rods and sledgehammers.

The JNU administration, in a first information report, had claimed that on January 3, a group of students wearing masks had forcibly entered the CIS and switched off the power supply, making the servers dysfunctional, thereby affecting a range functions, including CCTV surveillance, biometric attendance and internet services.

'The main server of JNU was shut down on January 3 and had gone down the next day due to power supply disruption.

The response also said a total of 17 fibre optical cables were damaged on January 4 at 1 pm.

The RTI had also sought information on whether the CIS office contains the servers of the CCTV cameras in and around the campus.

To this, the reply stated that the servers of CCTV cameras are located in data centre and not at CIS office.

The RTI reply also said 'the details of locations of CCTV cameras cannot be provided due to security reasons and concerns'.

Das received the reply to a RTI filed by him on January 9.

The RTI also asked details of the total number of times the JNU website was not functioning due to technical snag or problem since December 25, 2019 to January 8, 2020.

The reply stated that the varsity's website was functioning during this period since it is 'critical' and 'a logical public face of the university'.

'It was running from alternate backup arrangement during this period,' the varisty said in its response.

No immediate reaction was available from the university.

Source: PTI  -  Edited By: Utkarsh Mishra© Copyright 2020 PTI. All rights reserved. Republication or redistribution of PTI content, including by framing or similar means, is expressly prohibited without the prior written consent.
Related News: CCTV, RTI, CIS, JNU, National Campaign for People's Right to Information
SHARE THIS STORY
Print this article