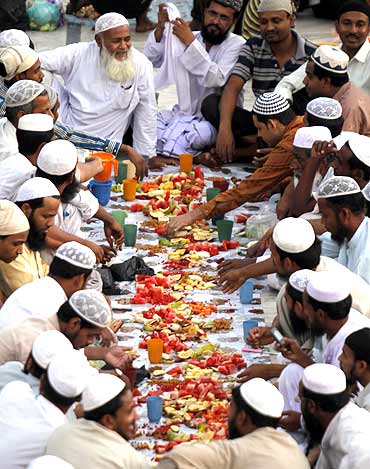 The Rashtriya Swayamsevak Sangh's Muslim wing will organise iftars on Fridays in Uttar Pradesh this Ramzan and serve only cow milk and its products to drive home the message of 'save the cow' and that consumption of its meat invites diseases.

Mahiraj Dhwaj Singh, national co-convenor (organisation) of Muslim Rashtriya Manch for Uttar Pradesh and Uttarakhand, said it is for the "first time" that people who observe roza (fast), will be ending it with a glass of cow's milk.

The MRM was formed in 2002 at the initiative of the then RSS chief KS Sudarshan to allow the Sangh to reach out to Muslims.

"Emphasis will be laid on the use of cow milk and other dairy products at the iftars. And, it will be for the first time that such an iftar will be held in Uttar Pradesh," Singh said.

Citing the benefits of cow milk, he claimed, "Even Muslim scholars are of the view that cow milk is good for health and ghee made using this milk is medicine. This ghee is used as base is preparing various ayurvedic medicines also," adding consuming cow meat invites a number of diseases.

He also said that during Ramzan, special prayers will be offered in which appeals will be made to protect the cow.

"All living beings (animals, birds, trees and plants) owe their existence to Allah. If we adopt a humane approach towards them, we will incur His blessings," the senior MRM office bearer said.

"During Ramzan, prayers will be held. A message to end animosity and spread love, bonhomie and brotherhood will be disseminated. Message to uphold the unity and integrity of the nation will be spread.

Programmes will be held to pledge for development of the country, while upholding its sovereignty," he said.

Welcoming the move of the MRM, Waseem Raini, president of Lucknow-based Pasmanda Muslim Samaj, Muslim organisation, said, "If different sweets such as pedhaa and other edible items made using cow's milk are served during iftar, we have no objections. This will eventually increase the bonhomie and brotherhood between Hindus and Muslims."