Senior Congress leader Digvijay Singh launched a sharp attack on the Rashtriya Swayamsevak Sangh and the Bharatiya Janata Party, likening their "hatred" towards Muslims to that of the Nazis towards the Jews and claiming that the "roots of terrorism" in India lie in BJP leader L K Advani's 1990 Rath Yatra.

He also sought to take the battle over the 2G spectrum allocation issue into the opposition camp by alleging that the radiowaves scam originated under the National Democratic Alliance rule when Pramod Mahajan was the Telecom Minister.

Singh said it was under Mahajan's tenure that allocation of spectrum was made on the first-come-first-serve basis as against the prevailing auction of circles. In a hard-hitting speech, he also demanded fast-tracking of probe against two chief ministers of Uttar Pradesh who allegedly own assets disproportionate to their known sources of income.

Singh, the AICC general secretary incharge of party affairs in UP, did not take any names. There are disproportionate assets cases against Chief Minister Mayawati of the Bahujan Samaj Party and former chief minister and Samajwadi Party supremo Mulayam Singh Yadav.

Hitting out at the RSS, Singh said "in the 1930s Hitler's Nazi party attacked the Jews... similarly the RSS ideology wants to capture power by targeting Muslims under the garb of furthering nationalism." Singh, who was seconding the political resolution moved by Finance Minister Pranab Mukherjee at the 83rd Congress Plenary in New Delhi, singled out senior BJP leader L K Advani for "sowing the seeds of division" among the Hindus and Muslims by undertaking the controversial Rath Yatra in 1990.

The RSS has been "sowing the seeds of Muslim hatred" in the minds of the new generation through Shishu Mandir schools and "this is the biggest danger for us", he claimed. He claimed the RSS had made its activists enter the bureaucracy, police and even the army.

Singh said the rise of RSS-BJP "ideology of violence and hatred" posed the "biggest challenge" before the nation. The other big challenges were the Communists and regional political parties, he said. He said the Congress needs to take steps to convert into trust the mistrust in the minds "of our Muslim brothers".

Singh claimed that the 2G spectrum scam originated during the NDA rule and BJP's demand for a JPC probe into spectrum allocation was "only to delay the ongoing investigations" by CBI, Income Tax officials and the Enforcement Directorate. The political resolution states that secularism is the lifeline of Indian democracy "that is threatened by the ideology of the BJP and its affiliate organisations like the RSS, which spreads hatred and violence.

"The RSS and the VHP are insidious in their effort tobreak India," it said. Maintaining that the "failure to protect all citizens will cast a shadow over our future," it said the BJP and RSS-VHP "continue to hide their prejudice and the atrocities committed by them behind the rhetoric of economic progress and pseudo-nationalism" and asserted it was imperative that the Congress and the people "call their bluff". In an attack on Gujarat Chief Minister Narendra Modi, it said, "we cannot be indifferent to the plight of our fellow citizens in Gujarat who have suffered untold misery -- by denying their humanity we will betray our own". 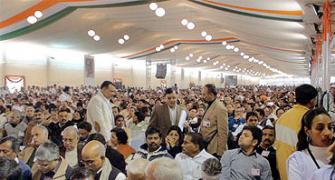 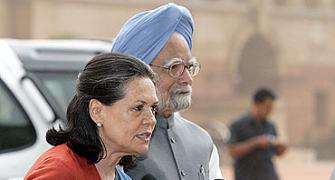