RSS, BJP reach out to Muslims ahead of Ayodhya verdict 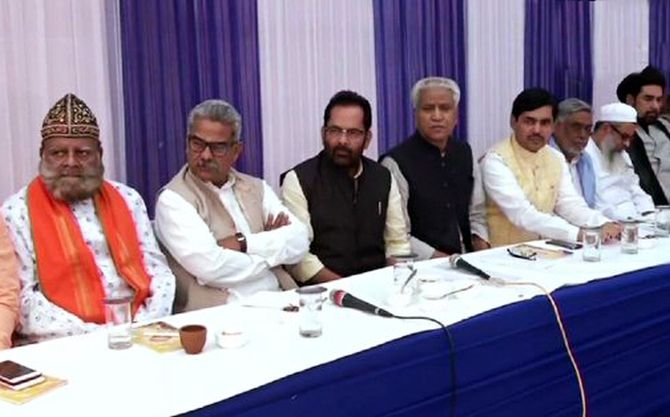 Days ahead of the Ayodhya verdict, senior Rashtriya Swayamsevak Sangh and Bharatiya Janata Party leaders reached out to prominent Muslim clerics and intellectuals and held a meeting with them in New Delhi on Tuesday during which it was stressed that irrespective of the nature of the court ruling there should neither be 'junooni jashn' (excessive celebration) nor 'haar ka hungama' (brouhaha over defeat).

"A historic dialogue was held today in which Muslim intellectuals and clerics participated. At the meeting, it was stressed that all efforts should be made to strengthen the unity and brotherhood in the country under all circumstances," Naqvi told reporters after the meeting.

"Kahin par bhi jeet ka junooni jashn aur haar ka hahakaari hungama nahin hona chahiye, usse bachna chahiye (Nowhere, the verdict should be excessively celebrated as a victory, nor there should be a brouhaha over the defeat. We should completely avoid this)," he said.

Hussain said it was unanimously agreed at the meeting that the Supreme Court verdict on Ayodhya will be acceptable to all.

"This verdict will strengthen the country. A message of unity has gone out with today's meeting. This dialogue (between the RSS leaders and Muslims) that has started will not stop and meetings between the Sangh representatives and the Muslim community will continue in future as well," he added.

The meeting is seen as part of efforts by the RSS and the BJP to reach out to the Muslim community and send out a message of peace and harmony.

According to sources, RSS leader Gopal asked those present in the meeting whether it was imperative that Muslims lead Muslims and Hindus lead Hindus.

"Why can't a Hindu lead a Muslim and a Muslim lead a Hindu?" he asked.

Asserting that inclusivity has been India's tradition, Gopal was quoted as saying at the meeting that in the entire history of the RSS, none of its chiefs have ever uttered a single word against the Muslim community.

Ramlal was quoted as saying that despite different religions, the mindset should be 'nation first'.

The entire community should not be blamed for the act of a single person belonging to a particular community, Ramlal was quoted as saying at the meeting.

"A statement from a person should not been seen as a statement of an entire organisation," he added.

Speaking to reporters after the meeting, Jawad said it was decided at the meeting that appeals should be made that the verdict should be respected by all.

"Those who win should not get overexcited and the same goes for those who end up on the losing side. It should not be seen as victory or defeat," he said.

It was also suggested that another meeting should take place which should include other Hindu groups such as the Vishva Hindu Parishad and the Shiv Sena, he said.

Filmaker and artist Muzaffar Ali said: "Today the economics of the country is so bad, if things go wrong and the people enter into any kind of communal disturbance, the economy will be very badly shattered."

Aligarh Muslim University Vice Chancellor Tariq Mansoor, who also attended the meeting, later told reporters that people should not make provocative statements, and appealed for being careful on social media.

Those present at the meeting expressed commitment to strengthen and protect the fabric of the socio-communal harmony, brotherhood and unity of the country under all circumstances, Naqvi said, adding that 'unity in diversity is our cultural commitment'.

The Supreme Court is expected to give its ruling in the emotive and politically-sensitive Ram Janmabhoomi-Babri Masjid land dispute case before November 17 as Chief Justice Ranjan Gogoi, who is heading the Constitution bench in the matter, demits office that day. 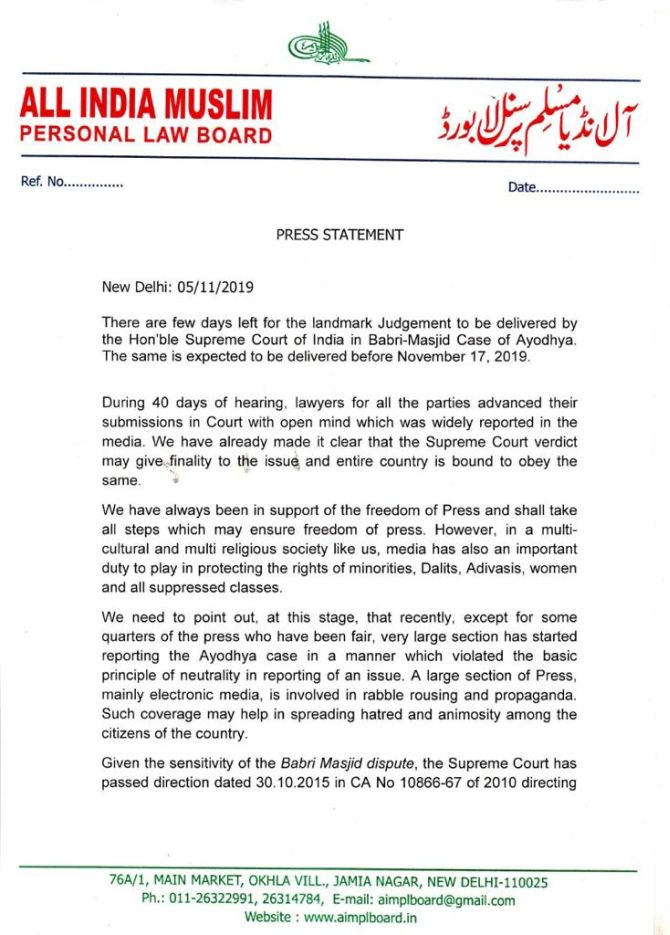 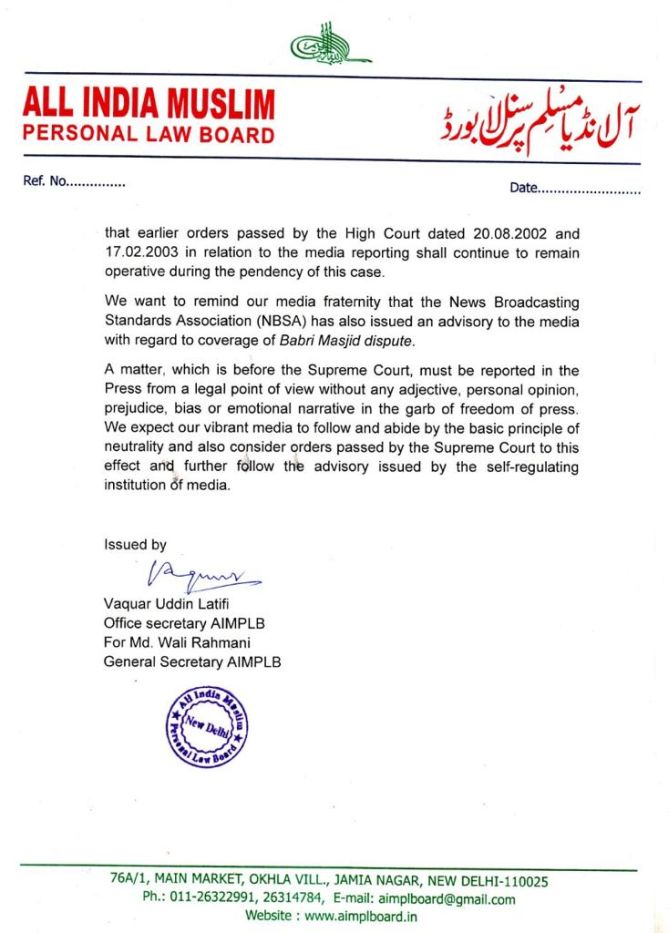