Parliament on Monday passed a bill to provide constitutional status to the National Commission for Backward Classes, as several members in the Rajya Sabha urged the government to make public the findings of the caste census and implement reservation accordingly. 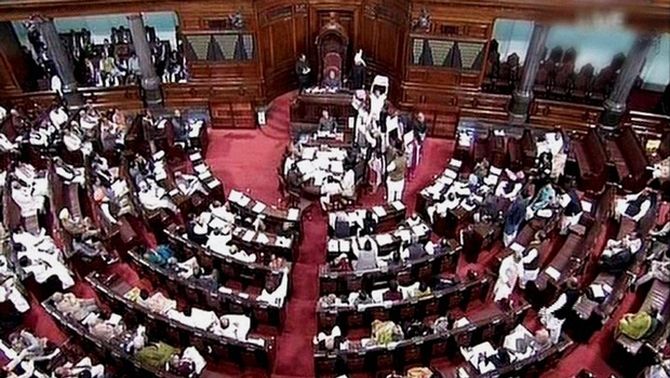 The demand was raised during a debate on the Constitution (123rd Amendment) Bill 2017 in the Upper House, which was passed by the Lok Sabha on August 2 superseding the amendments earlier carried out by the Rajya Sabha.

On Monday, the Upper House adopted the legislation along with the amendments made by the Lok Sabha, by 156 votes to nil. Over two-third majority of those present voted in favour of the bill, which is a necessity for amending the Constitution.

The Rajya Sabha had earlier passed the measure on July 31 last year, along with an amendment and sent it to the Lower House. The Lok Sabha had passed the bill last week with alternate amendments as well as some more changes unanimously with over two-third majority.

Replying to the debate on the bill, Social Justice and Empowerment Minister Thaawarchand Gehlot said it would help the backward classes people fight atrocities against them and ensure quick justice to them. "This bill would provide justice to the OBC people, it is the need of the hour," Gehlot said.

Referring to the suggestions by the opposition parties, he said the NCBC would have female representation.

He said the state governments had their own lists of castes of OBC people, while the Centre had its own. The NCBC would recommend only to the central government regarding inclusion or deletion of a particular caste in the list.

"This is an important issue. There was demand for a constitutional status to OBC Commission from the 1980s and Parliament had held discussions several times. It has been discussed by the Standing Committee," Gehlot said and urged the members to pass it expeditiously.

He said once the bill is passed by Parliament, the government would immediately form the commission.

He charged the Congress of sabotaging the issue earlier and said it had chance to rectify its mistake by ensuring passage of the Bill in the Rajya Sabha.

"Last time the bill fell in Rajya Sabha...UPA in its two terms failed to bring this amendment... OBC is a religion- neutral term and the Bill failed last time because politics defeated social justice," Yadav said.

He said the bill is long overdue and lamented that many states have not implemented 27 per cent reservation to the OBCs and added that parties should "rise above vote bank politics and work towards social justice".

Congress MP Chaya Verma sought reservation in Parliament and assemblies for OBCs said creamy layer should be removed. She asked the goverment how it will implement the quota when it was encouraging contractual jobs.

MP Narendra Jadhav demanded that the findings of the socio-economic caste census be made public. He said the Rohini Commission report and the census data should be
compared to prepare fresh data of OBCs.

ndian National Lok Dal MP Ram Kumar Kashyap said two panel members must be taken from extreme backward classes and there should be a bill for reservation in legislature for the OBCs.

Bahujan Samaj Party MP Ashok Sidharth allged that the motive behind the government to bring the Bill now was to woo the electorate in the ensuing assembly elections.

Rashtriya Janata Dal Manoj Kumar Jha expressed hope that this will create a level-playing field, while Telangana Rashtra Samithi MP B Prakash said no serious efforts have been made for caste-based census.

Communis Party of India-Marxist MP T K Rangarajan said mere acts will not do as they did not percolate down to the grassroot level, as recent data showed that only 7 out of 100 teachers in the Central Universities belonged to SC/ST and OBC categories.

Congress MP B K Hariprasad said although the government has made provision for a female member, it has left out representation for minorities.

"But unfortunatley, there are hardly any OBC or SC judges in the Supreme Court. There may be some in the high courts," he said, adding there was a huge disparity in this matter.

MP Sambhaji Chhatrapati demanded that Marathas be included in the OBC list to get equal opportunity in jobs. "It is not clear that why Marathas have been excluded in one or the other commission," he said, adding they were identified as backward class by the British rulers also.

Samajwadi Party MP Ram Gopal Yadav also supported the bill and said the government should come out with the caste-based census and implement the reservations accordingly. He demanded that the reservation should also be extended to the judiciary.

While All India Anna Dravida Munnetra Kazhagam MP A Navaneethakrishnan supported the bill and sought removal of creamy layer from the OBC list, Trinamool Congress MP Ahamed Hassan said the bill unduly interfered with the affairs of the state governments.

AIADMK MP Vijila Sathyananth suggested that there should be one woman member and one member from minorities on board of the commission. She also pitched for representation from each region of the country.

She also drew attention towards skewed representation of OBCs in various committees, commissions, boards and other different fora of government.

BJP"s Ram Chandra Prasad Singh supported the bill and demanded for another such bill for highly backward classes, while Shiv Sena MP Sanjay Raut said "we have to eliminate caste to strengthen country's political system."

Dravida Munnetra Kazhagam MP T K S Elangovan said suggested that the word Governor should be replaced by government for consultation by the commission because government knows better about backward
classes in a state than an executive appointed. He also said that the power to list out OBCs should lie with the states.

Republican Party of India MP Ramdas Athawale sought that the total quota for backward classed should be increased from 50 per cent at present to 75 per cent.

COngress MP Ripun Bora also suggested that there should be representation of women and minorities in the commission, while CPI MP D Raja was of the view that there is no point of having commissions whose recommendations are not biding on the government.

He said "NITI Aayog is promoting public private partnership and privatisation of public sector undertakings. Where is the scope of reservation? The commission should not be devised to hoodwink people".

Congress MP Madhusudan Mistry said the commission should not suffer shortage of funds, while MP Ritabrata Banerjee was of the view that this bill interfered with the freedom of the state. Bodoland People's Front MP Biswajit Daimary also supported the bill. 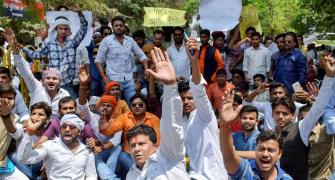 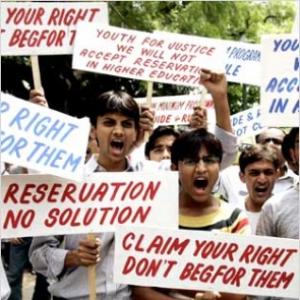