After finally expanding the Maharashtra cabinet, the Eknath Shinde-Devendra Fadnavis government will have to do the tightrope in allocating portfolios, and as per speculation, the senior Bharatiya Janata Party leader may get the crucial Home ministry. 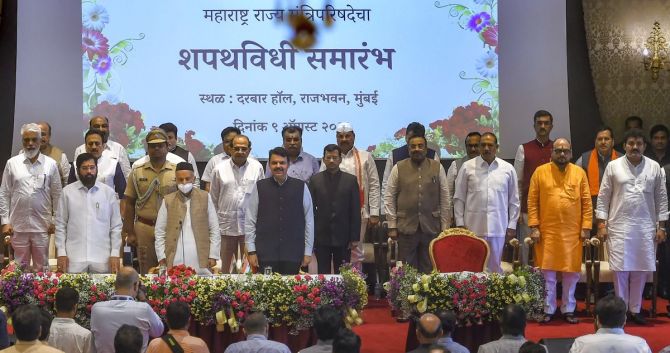 Fadnavis, currently the deputy Chief Minister, will get the Home portfolio for sure, a senior Bharatiya Janata Party leader said on Wednesday on the condition of anonymity.

The BJP might pick Dr Vijaykumar Gavit, who represents Nandurbar, as the Tribal Development Minister, said the leader.

Notably, a scam of siphoning off Rs 6,000 crore had happened under the watch of Gavit as the tribal development minister between 2004-12 in the then Congress-NCP government.

Gavit was a former MLA of the Congress and the NCP.

Maharashtra BJP president and former minister Chandrakant Patil, who is one of the 18 inductees in the state cabinet, may land a plum portfolio.

He had served as the minister of Revenue and Cooperation when Fadnavis was the chief minister. Another senior BJP leader, Sudhir Mungantiwar, may also get a key portfolio. He had held Finance and Forest departments earlier.

However, the BJP will have to share some key portfolios with the Shinde camp in view of the altered political scenario.

All the Shiv Sena rebels who had resigned as ministers of the previous MVA government to join the Shinde camp were inducted into the new cabinet on Tuesday.

They are also keen to retain their previous portfolios.

A total of 18 MLAs, including nine each from the Shinde faction of Shiv Sena and the BJP, took oath as the cabinet ministers.

Fadnavis handled the Home department when he was the chief minister of the BJP-Shiv Sena government during 2014-19.

It is not yet clear which departments Chief Minister Shinde will keep for himself.

During the tenure of the Nationalist Congress Party-Congress government from 1999 to 2014, the Urban Development Department had been retained by the chief ministers who headed the coalition.

The maximum strength of the Maharashtra cabinet can be 43 including the chief minister. With Tuesday's expansion, its current strength is 20.

“Devendra Fadnavis was the chief minister in the 2014-19 period and he had kept the home ministry with him. It was useful for him to keep a check on persons of concern in his party as well as from other parties. He will retain the Home ministry for sure,” the BJP leader said.

He said the Social Justice Department will be assigned to Dr Suresh Khade given the norm that the ministry is represented by leaders from backward communities.

Khade is the lone MLA of the BJP from the Sangli district in western Maharashtra. He is seen as its Dalit face.

He was social justice minister in the Fadnavis government from 2014-19.